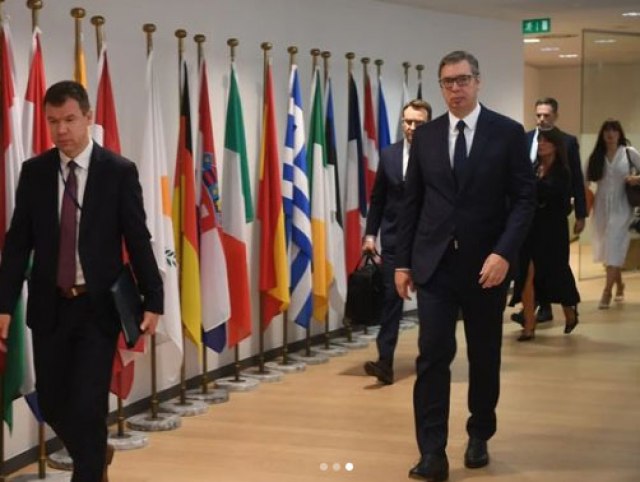 Serbian President Aleksandar Vučić scheduled a meeting with Serbs from Kosovo and Metohija from Brussels.

The meeting should be held on Sunday at 11 a.m. in the "Serbia" Palace.

According to "Novosti", political and institutional representatives of Serbs from Kosovo and Metohija, leaders of the Serbian List, all Serbian mayors, heads of districts, hospital directors were invited to the meeting.

However, not long after that news was published, and later confirmed by the media, it was reported that this could also mean that the president is bringing bad news from Brussels to the Serbs from Kosovo and Metohija.

Director of the Office for Kosovo and Metohija, Petar Petković, said from Brussels that the Serbian delegation is fighting for peace and that President Aleksandar Vučić will address the public on Friday, upon his return to Belgrade.

He also said that no one from the Serbian delegation would speak today, and that President Vučić would remain in Brussels for some time, reports "Novosti".

The newspaper "Blic" reports that there is no progress in the talks on any issue, because the Prime Minister of Pristina refuses any compromise. "We are anxiously awaiting the next few days," said the newspaper's source from Brussels.

The second round of trilateral talks between EU representatives with Serbian President Aleksandar Vučić and the Prime Minister of Pristina's temporary institutions, Albin Kurti, ended in Brussels.