Kharchenko delivered credentials to Vucic addressing him in Serbian VIDEO/FOTO 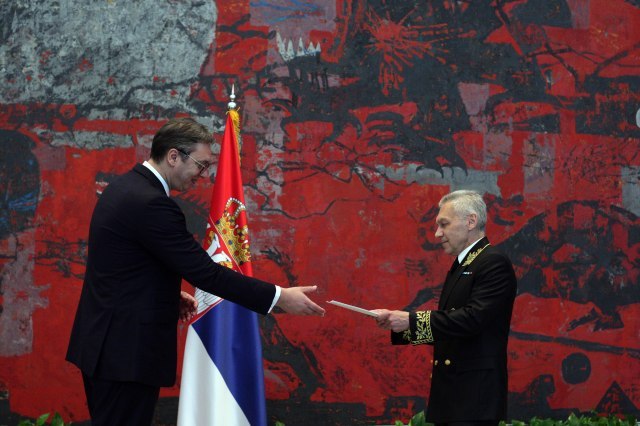 Alexander Botsan-Kharchenko who is a Balkan expert, spoke to Vucic in the Serbian language and said that he was honored to be able to deliver letters of credit to the Serbian President.

He pointed out that he wants to work on further improvement of cooperation between Serbia and Russia, which is already at an extraordinary level.

After the handover of the credentials, the meeting of President Vucic and the new Ambassador of Russia Kharchenko followed.

As previously reported by "Blic", referring to diplomatic sources, Kharchenko carries an urgent message to Serbian President Vucic by Russian President Vladimir Putin. According to this daily, the message concerns Kosovo.

Botsan Kharchenko arrived to Belgrade on Friday. Botsan-Kharchenko is coming to Belgrade to the ambassador position from the post of director of the Fourth European Department at the Russian Foreign Ministry. He is considered to be an expert on the Balkans and Southeastern Europe, as his department covered not only former Yugoslav Republics, but also Albania, Bulgaria, Greece, Cyprus, Romania and Turkey.

From the start of his career, he was involved in diplomatic processes related to the disintegration of the former Yugoslavia, and later on in addressing the issue of Kosovo, Sputnik said.

He was a Russian representative in the international contact group for Kosovo, then a member of the mediation troika, which included Wolfgang Ischinger, who represented the European Union and Frank Wisner, as the US representative.

When it was announced that the mandate to the current Russian ambassador to Serbia expires, media immediately speculated that he would be replaced by Kharchenko, who was then referred to as Putin's man, and when the official media wrote that he was a member of the Russian "diplomatic special forces", his choice for the ambassador post confirms the importance that the Russian President attaches to Serbia, particularly in the context of resolving the Kosovo issue.