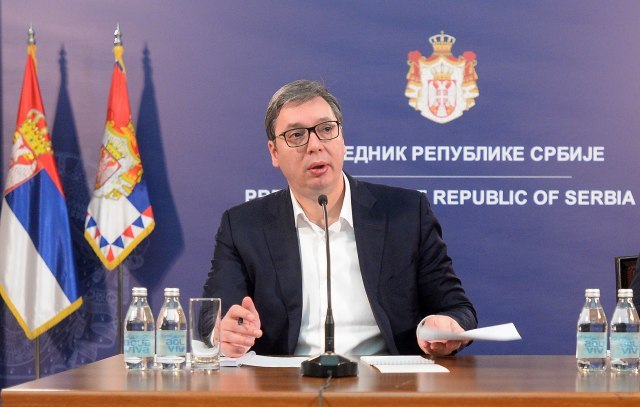 After talks with political representatives of Serbs from Kosovo and Metohija, Vucic said that he would "onsult with all major European and world partners, including China, regarding this development of the situation."

He said that political representatives of Serbs from Kosovo and Metohija requested consent to withdraw from all Kosovo institutions, and that he asked them "o wait for the stance of the state, which will be taken after consulting with foreign partners, including China."

"They asked the state of Serbia and myself as the president to talk with the government, and they are demanding to withdraw from all of Kosovo institutions, which means leaving parliament and all local governments and leaving northern regional police, and leaving the prosecutor's offices, and the complete judicial system of Kosovo," he said.

Vucic told a press conference that "although the meeting with 139 Serbs from Kosovo and Serbia continues, must now meet with (EP official) David McAllister."

Vucic said that Pristina authorities have been trying to get Serbs from the north and from the south to quarrel, in a variety of ways. "To have one thing the ones, and another for the others, trying to divide the Serb list. Then they invented their own minister from her husband's party, that did not receive even five percent of Serbs, in order to cast out (of the Kosovo government) those who received the votes of 90 percent of Serbs in Kosovo," said Vucic.

He stressed that Serbia will continue to advocate for a policy of peace and stability, and, he stressed, it remains up to him to, together with the government, to consider what and how to do in the future, "because we have been left completely alone."

"We have been left in the lurch," said the Serbian president.

"I asked representatives of Serbs not to respond to them today, and to wait for the response of the state of Serbia for another 45 days at most, because I want to meet with the president of China, I am talking, on phone or in person, with all the most important European and world leaders," Vucic said.

"If such offensive behavior of Pristina continues, we will be in a dead-end situation. At the latest within the next 45 days, the state will respond to the request of representatives of Serbs from Kosovo and Metohija, who are demanding to withdrawal from Kosovo institutions," Vucic underlined.