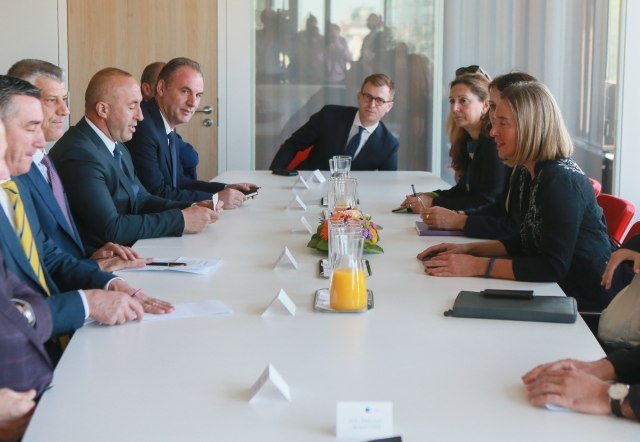 Haradinaj told reporters in Pristina on Tuesday that she was guilty because she allowed the process to "get derailed."

Earlier today, he received another letter from the Brussels-based "troika" - Mogherini and two EU commissioners - accusing him of endangering the continuation of the dialogue with Belgrade with unilateral actions, and stating that Hashim Thaci represents Pristina in the dialogue.

At today's meeting, the Kosovo government discussed "a comprehensive and binding draft agreement between Belgrade and Pristina."

The draft agreement was presented by Haradinaj's adviser, Avni Arfi, who emphasized that the document "provides that Serbia recognizes Kosovo's independence, Kosovo's sovereignty, justice for war crimes and compensation for victims of sexual violence."

He also said Kosovo's membership in international organizations would be demanded under this document.

Arifi said that at three meetings with, as he said, "the Serb side, they were not ready to implement any kind of agreement."

"The government of Kosovo has implemented every Brussels agreement," he continued, adding, "the refusal of the Serb side has led to a loss of 12 million euros. The citizens of Kosovo are being stopped at the border daily."

Haradinaj reiterated once again that the tax on Serbian goods will not be abolished until, as he said, "Serbia recognizes Kosovo."

Asked why he was angry during yesterday's meeting with Mogherini n Brussels, Haradinaj said that she was "hurt by his truth."

"Kosovo will no longer be at the mercy of others. Everyone will see that this tax measure will not be abolished, but will instead be consolidated and will not change until Serbia recognizes Kosovo's independence, and they need our market," Haradinaj said.

Albanian language daily Bota Sot writes that although Haradinaj was not invited to a meeting in Brussels tomorrow, he said there was "no reason for him to be there" as he has already "done what he had to do and say."

"Mogherini has damaged the dialogue and this has caused many problems in the region," he said.