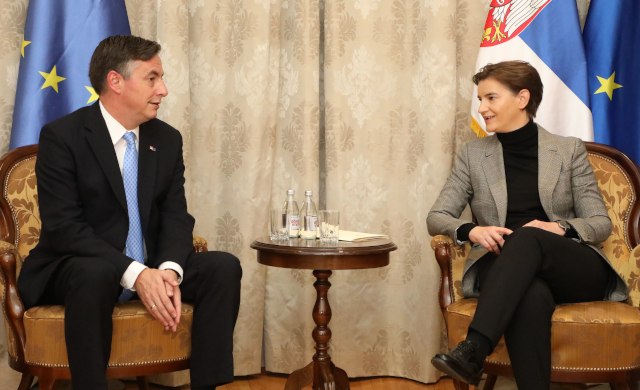 According to the government, Brnabic said during the meeting that "macroeconomic stability, public administration reform and the rule of law are the pillars of long-term development Serbia, and not just conditions for full EU membership."

She also "emphasized that comprehensive reforms are primarily in the interest of the citizens of Serbia" and said she expectated that the European Parliament's report on Serbia's progress, at the end of November, will be positive.

The prime minister added that she was "aware that there is still a lot of work to be done in the area of strengthening the rule of law and achieving progress in Chapters 23 and 24" and "explained that the reform of the judiciary is underway and that the final version of the constitutional amendments, in line with the suggestions of the Venice Commission, will soon be in the parliamentary procedure."

The officials highlighted that commitment to negotiations between Belgrade and Pristina is crucial for further progress and preservation of the stability of Serbia and the entire region, and expressed a strong belief that the dialogue will continue in order to find a lasting and sustainable solution.

The European Parliament rapporteur praised Serbia's progress and the government's efforts to continue implementing the most important reforms.

McAllister emphasized that Serbia is the leader in the region in terms of economic reforms, and praised the government's commitment to open dialogue with representatives of the civil sector and media and journalistic associations.

It is important, he said, to encourage Serbia on its path to the European Union and to provide support in all areas where there is room for improvement.

McAllister said that Serbia, with its open 14 chapters, is on a good track to the European Union, and added that he will insist on opening as many new chapters as possible at the next Intergovernmental Conference of Serbia and the European Union.