Vucic in Moscow: "We got everything we looked for"

"We got everything we looked for," President Aleksandar Vucic said after his meeting with Russian leader Vladimir Putin in Moscow on Tuesday. 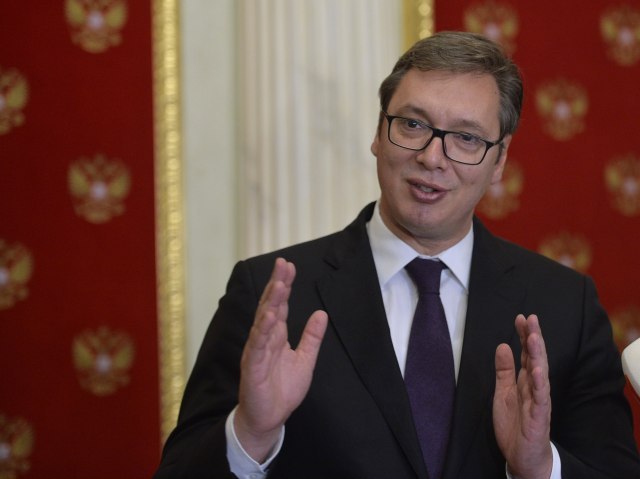 Vucic stressed that they agreed on "every topic of discussion."

"We got everything that we looked for. We agreed on everything," he told TASS, adding that he "could not reveal the details."

The Russian agency quoted Vucic as saying that he thanked the Russian president for supporting Serbia's territorial integrity and sovereignty.

"We didn't expect much (from the meeting), just one thing - to continue this work (to support Serbia). And I am very pleased with the response of President Putin and I told him , 'thank you very much, dear friend, thank you very much, esteemed president, for maintaining together with us Serbia’s territorial integrity, but also international law'. This is very important for Serbia," he said.

Vucic also "gave high marks to cooperation of Moscow and Belgrade on the international arena and expects that the two countries will be strengthening cooperation in the economic sector," the report said.

"We have settled a lot of concrete issues today, and I am looking forward to meeting (Putin) in Belgrade soon," he added.

Vucic told the agency that he expected his Russian counterpart to visit Serbia before the end of this year.

The Serbian president told reporters in Moscow on Tuesday, after his meeting with Putin, that he informed the Russian president "down to the smallest detail about the complete situation in Kosovo, about what the big world players want, what role Russia has, and what kind of support Serbia expects."

"We encountered understanding, a sincere and friendly stance of Putin and Russia towards the Serbian people and Serbia," Vucic said.

Asked whether he acquainted Putin with his "delimitation plan" for Kosovo, Vucic said he had nothing to say about that plan, as it has been rejected by "EU states, the Albanians, and the Serbs."

"I thought it was a rational solution, but nobody else thought so. I talked about the situation, about the fears I have if the provocations continued and if there were any attacks on the life and property of our people in Kosovo and Metohija," Vucic said.

"Out of the two hours of our conversation, we spoke about Kosovo and Metohija for least 45, 50 minutes," Vucic said.

But he added that he cannot provide more information about this, "because it wouldn't be fair either to President Putin or to our public."

Vucic said that they also spoke about "the complete situation in the region."

"There is no important regional issue that we have not touched on, and not only touched on, but analyzed in detail. Accordingly, I expect President Putin's visit (to Serbia) to bring many concrete economic results, to immediately lead to a rapid growth in our trade," Vucic said.

The president also said he expects Russia to provide "equally strong and even stronger" support in international forums, to the territorial integrity of Serbia, as well as to his country's "independent and free" decision-making, "for which Serbia is appreciated and respected."

Vucic thanked Putin for his support to the Serb people, and presented him with a gift - a book.