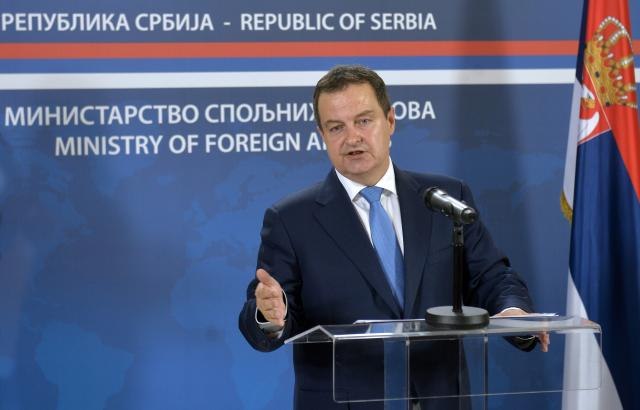 The first deputy PM told reporters that the name of the country would be revealed next week - as the diplomatic note is not yet official.

During a news conference at the Foreign Ministry in Belgrade, Dacic said that whenever a country withdraws its recognition of Kosovo diplomats from the West and Kosovo's Foreign Minister Behgjet Pacolli travel to that country to persuade them not to do it.

Dacic said that two days ago he received a note by email that one country had withdrawn the recognition of Kosovo - that is, this country "acknowledged that it had made a mistake" - and he expects that "the nearest Serbian embassy" will next week receive this note officially.

The minister said this country recognized Kosovo "about six years ago," that it is "five times the size of Serbia" and is not located in Africa - and added that he now expects Pacolli to try to figure out which one it is.

Dacic said all this shows "nothing is over when it comes to Kosovo - and that Pistina would be better off accepting a compromise solution as soon as possible."

The minister also said that those countries that have decided to revoke their recognition now face great pressure.

The same day that Liberia's note withdrawing the recognition of Kosovo was published, US and other Western countries put pressure on Liberian President George Weah and asked that he receives Pacolli, the minister said.

Dacic said he expects that in the coming months, the number of countries that have recognized Kosovo will fall to below 100.

"They (Kosovo) speak about 115, 166 - it's a mirage," Dacic said, adding that Pristina authorities are doing this "for internal use."

Speaking earlier on Friday for RTS, Dacic said he expected a country to revoke its recognition of Kosovo during the day, but that he could not reveal which country this was.

"This will be the sixth country that has recently withdrawn the recognition of Kosovo. We are now close to the situation where the number of states that have recognized Kosovo will fall below 100, which was my goal," the minister said.

When it comes to Liberia, the Foreign Ministry announced on June 20 that the country had withdrawn the recognition of Kosovo's self-proclaimed Kosovo, but Pacolli later announced that Liberia would open its embassy in Kosovo.

Dacic emphasizes that "Liberia had not seen anyone from Kosovo for ten years (after it) recognized Kosovo."

"Now that they have withdrawn the recognition, Americans, the English, Pacolli all went to Liberia, he was received by Weah (president of Liberia), and he announced that Liberia would open an embassy in Pristina. If he had some paper, Pacolli would show it. I show papers," Dacic said.

According to him, after Sao Tome and Principle several years ago, four countries have since withdrawn recognition, and today they will be joined by a sixth.

"My goal is for the number to be below 100 countries," the head of diplomacy said.

Commenting on the idea of ​​partitioning Kosovo, Dacic pointed out that it was "not too late for that" - while those who say it is, "think that it cannot be achieved."

"Those who tell you it's too late for a partition, or that they're against it, either do not understand the mode we are in now, or want us to bring it back through war, or adopt a policy to wait a couple of hundred years to get it back," said Dacic.