A permanent Kosovo solution requires agreement from Germany, France, the EU, the US, Turkey, and Russia, President Aleksandar Vucic said in Berlin on Friday. 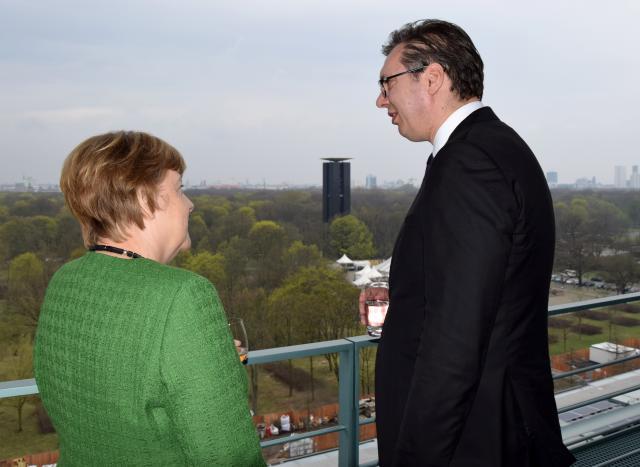 "We are ready for a compromise, I told that to Mrs. Merkel, but for that, two sides are needed," Vucic said after his meeting with the German chancellor.

He added that in the past, he believed it was easier for Serbs and Albanians to talk to alone.

"However, a lasting solution also requires agreement from the Germans, the French, the EU, the Americans, Turkey, Russia, while China should also be informed about everything," Vucic said.

Asked by a journalist about "the price that Serbia is willing to pay when it comes to Kosovo," Vucic said that he "does not know what that means."

Stability does not have a price, he continued, while "military conflict would set everything back 100 years and more."

"I don't want some future president to be asked the same about Kosovo in Berlin in 30 years' time," Vucic continued. "We better try to solve something, but it does not depend only on us, but on other factors as well."

Vucic also said that he spoke with Merkel about the Community of Serb Municipalities (ZSO) in Kosovo, and that he "went through the Brussels agreement point by point" - and then stressed that he "ate nothing" during their lunch in Berlin today, "and has not slept for days" because of Kosovo.

Asked whether he spoke with the German chancellor about "Kosovo's UN chair," Vucic replied: "Mrs. Merkel is one of the wisest and smartest interlocutors I have spoken to, and someone who is wise and clever would never speak in such a way. She is fair and concrete, full of self-confidence, and people like that don't use such vocabulary."

And while the ZSO was discussed, the president said he would not reveal "what Mrs. Merkel said."

"I can say what I said. I analyzed the Brussels agreement, point by point. Mrs. Merkel knows all that. The first six points (of the agreement) have been implemented, after that, nothing. The first six were the obligation of Serbia, those after are not," he said, referring to the 2013 agreement reached during the EU-brokered Belgrade-Pristina dialogue.

Vucic then added that the German chancellor "wants things to be kept under control."

"I will say that she told me there is trust between us, and I said that my trust in her is unlimited," Vucic said, and pointed out that "the tone of the German cancellor was significantly different in 2011."

"You think she doesn't know what kind of problems we are facing, you think that people in Serbia really don't know what the situation is in KiM (Kosovo and Metohija). In Serbia, no one is stupid or blind, people see the way we're fighting, we're bringing factories, and that we cannot do if we do not have good relations with Germany," Vucic said.

He reiterated that Merkel "knows what Kosovo means to Serbia" and also "understands our position - and a solution is being sought in line with that."

"Does she respect Serbia - yes she does. And I feel special here because you cannot get such respect everywhere," said the president of Serbia.

Asked what about his message to the citizens of Serbia, Vucic said: "It will not be easy about Kosovo, everything else is going in the right direction. I do not lie to people in Serbia, I never have, and people know it. There will be no good solution for KiM, and I'll tell you that, but a compromise means us all being a little dissatisfied."