Nikolic "not giving up" on making deal with Vucic

President Tomislav Nikolic has told the tabloid Kurir that he is "not giving up on (making) an agreement with Aleksandar Vucic." 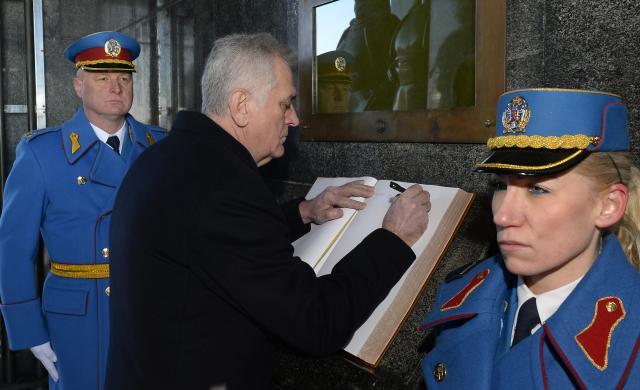 He stressed that he "does not want to comment" on the attacks against him that have been "ongoing for days."

"I'm not interested in all those who have been dragging me through the mud they themselves created these days, and they don't deserve me addressing them in any way. Most daily newspapers have been lying against me for days. Nothing can influence me and make me choose to give up on an agreement with Aleksandar Vucic and the SNS," Nikolic said.

According to him, the upcoming presidential campaign will be "a good example to see who will give whom space."

The president said that he was "not attacking anyone, not spreading lies, not making life miserable for anyone's family or friends, not endangering anyone's freedom," and expected the media to "simply also publish his opinion."

"These days," he continued, "the media are either sufficiently unbiased, or serving somebody. I never asked for it, nor do I have media outlets who are publishing only what seems to them to benefit me."

Nikolic also stressed that he was "under obligation to protect his friends and family."

His statement came after unconfirmed media reports last week that he plans to run for reelection even without the support of the party he and Vucic founded, the SNS.

In the meantime, this ruling party confirmed Vucic, its leader and Serbia's prime minister, as its presidential candidate.

B92 learned on Monday from sources close to Nikolic that he and Vucic could meet during the day.

The same source said earlier that former and current SNS leaders have communicated by phone, and that "reconciliatory tones" were heard late last week.