International Holocaust Remembrance Day was marked in Serbia with a central state ceremony held at the Staro Sajmiste memorial in Belgrade. 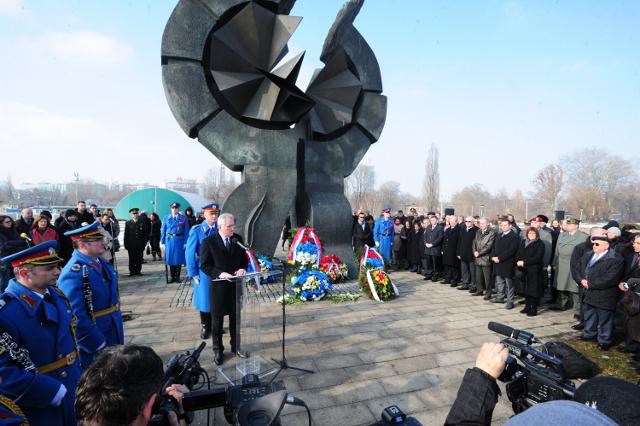 Power wielders are attempting to rewrite history, but Serbia must not let that happen, President Tomislav Nikolic as he addressed the ceremony.

"Sometimes we are reprimanded for being too focused on history, and told we should turn to the future, but such advice usually comes from those who never faced their own past in an honest way," Nikolic said at the site of a Second World War concentration camp for Serbs, Jews and Roma set up by the Nazi German occupiers.

"That is why today as well some power wielders consider obedience to be a condition that should be met in order for us to cooperate, as they say, openly and constructively. They are trying to get us to doctor the facts, to adapt them ideologically in a way that suits someone best today. Then these are no longer the facts and this is no longer history, but a barter involving the victims, to which Serbia will never agree," the president stressed.

According to him, collective memory is "exceptionally important not only because we owe it to our ancestors, the innocent victims of mindlessness and evil, but because such memory acts as defense against denial, forgetting, and attempts to alter historical facts."

"The old saying goes that history is written by the victors, but today, power wielders are trying to change it. We must not allow that to happen, that would kill our fellow citizens who died a second time," Nikolic said, stressing, "we must sincerely dedicate ourselves to preserving peace and reason, so that wars and mindless suffering never repeat again."

"Our grief, memory and remembrance are sincere, just as our forgiveness is sincere, without which we could not build friendship with those states and those nations from which individuals, ideologues of Auschwitz, Jasenovac, Sajmiste came," the president said.

Serbia believes that "perspective relations among nations and states in the modern world are built on mutual understanding and respect, common interests, friendship, and never on concessions that bring into questions our victims, our past marked by suffering, our being, and our history," he said.

Nikolic also announced that he supports the establishment of an institution that would include Staro Sajmiste and the existing Museum of the Victims of Genocide, whose role would be to preserve the memory of the innocent Serb, Jewish, and Roma victims who died during both world wars.