BELGRADE -- President of Serbia, Aleksandar Vučić, presented the medal to the Minister of Foreign Affairs of Cuba today, and then addressed the citizens of Serbia.

BELGRADE -- President of Serbia, Aleksandar Vučić, presented the medal to the Minister of Foreign Affairs of Cuba today, and then addressed the citizens of Serbia. 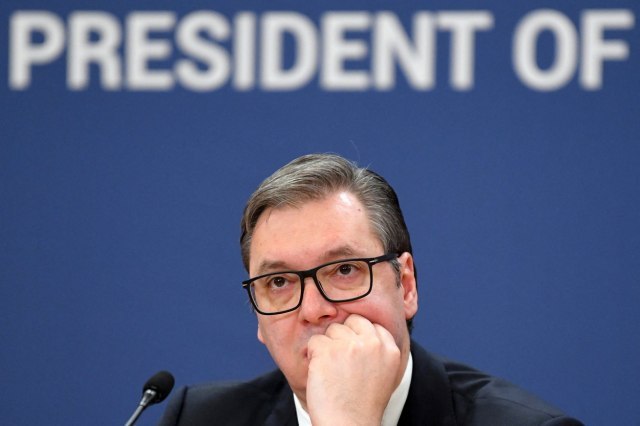 At the very beginning, Vučić pointed out that Cuba is on the side of international law and that it is difficult to objectify justice, but that it is clear who respects UN resolutions.

"The Republic of Cuba is on the side of the law, as is Serbia, in all cases of international disputes. Our only policy is to respect the UN and the resolutions passed by that body," he added.

Vučić referred to the current situation in Kosovo and Metohija.

Regarding the optimistic statements from the EU about reaching an agreement with Pristina, he pointed out that European politicians do not have to be gloomy and look pessimistically at everything like he does. President of Serbia, Aleksandar Vučić, said that he does not see a solution at this moment and that on September 1st, the campaign to change license plates will begin.

"Kurti is convinced that it will be successful. It is a process that will continue. We are certainly faced with that problem, but we will have to see. I expect important visits and talks after the Open Balkans summit, Erdogan will come. At the moment, I don't see any possibility of progress because I don't see a desire on the part of Pristina to reach a compromise," he said.

He pointed out that Serbia is facing big problems. "We are also facing pressure to impose sanctions on Russia, and we know that this does not bring anything good, and we ourselves have been victims of it. When you have all this, the political scene becomes more extreme. You say that the opposition wants to protest because of the ban on Pride. Well some protested that it was not banned. The only thing that unites them is that they are against the state. Decent Serbia and normal people are silent and watch what everyone else is doing, hoping that the state alone will be able to deal with those extremes," he said.

Vučić adds that no one knows how to rationally explain their actions, and repeats that the state has big problems.

"Some say that Pride is as important as Kosovo and Metohija. Really. It's a sad truth if that's the case. And nobody wants to put themselves in the shoes of state institutions. On the one hand, you have hysteria against the parade."

“If a gathering is banned, it is banned,” he told the media on a press conference. He recalled the view of the authorities that the security requirements are not in place to hold the event, adding that the organizers have to understand that and find other ways to fight for their rights instead of insisting on the gathering at any cost.

“There will be no fights and no conflicts,” Vucic said. He said anyone who wants to start violence will be arrested.