BELGRADE -- Serbian Patriarch Porfirije and Montenegrin Prime Minister addressed the journalists, saying that an agreement on the Fundamental Agreement had been reached.

BELGRADE -- Serbian Patriarch Porfirije and Montenegrin Prime Minister addressed the journalists, saying that an agreement on the Fundamental Agreement had been reached. 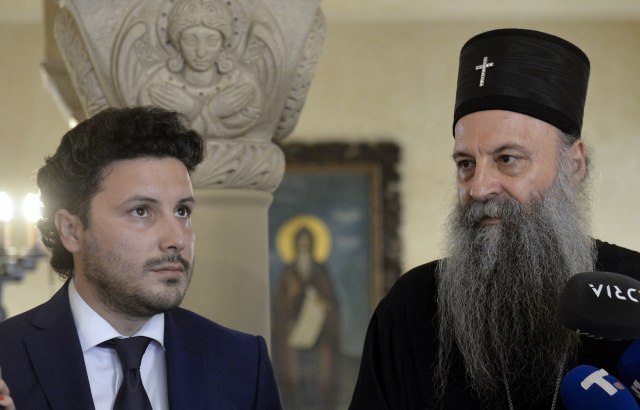 After the meeting in the building of the Patriarchate, the Patriarch of the Serbian Orthodox Church and the Montenegrin Prime Minister addressed the journalists, saying that an agreement on the Fundamental Agreement had been reached.

The Patriarch of the Serbian Orthodox Church Porfirije, who was the first to address the gathered journalists, said that he had a joyful opportunity to meet with the Prime Minister of Montenegro for the third time. "Apart from the conversations we had on general topics, and everyday life, we also discussed the Fundamental Agreement," he said.

"Starting from the fact that the church is separate from the state and that our church, wherever it has its jurisdiction, respects the laws of that state, we concluded that it is important that the relationship between church and state is regulated by contract, as is the case with all religious communities, as it exists in all other states", the patriarch said.

"At this moment, we have reached an agreement, that is, an agreement on the Fundamental Agreement, with the proviso that the existing text of the Basic Agreement must pass through the Synod of Serbian Orthodox Church, and when and if it does, we will start signing," said the Patriarch.

He explained that the Serbian Orthodox Church considers that it never thought that it should have more rights than either a citizen of Montenegro or a member of another religious community. "But it goes without saying that the SOC cannot agree on being granted anything less than anyone else, and this agreement provides us with such a status," said the SOC leader, who also thanked everyone who contributed to making this agreement a reality.

Montenegrin Prime Minister thanked the head of the Serbian Orthodox Church for a constructive conversation, and added that, as he says, he always had interesting conversations with him.

"When it comes to the Basic Agreement, we have completed the procedures at the new working groups, and we continue with other procedures, as well as the Serbian Orthodox Church, and I do not see any problems there. On the contrary, if everything goes in good spirit, which is felt at our mutual meetings, soon this issue will be raised and resolved in the best way, to show respect for the Serbian Orthodox Church in Montenegro, as well as respect for the state of Montenegro, which is secular and does not want to enter the internal organization of any church", Abazović pointed out.

According to him, there is no pressure, no hurry, and the atmosphere regarding the final signing of the contract with the Serbian Orthodox Church should be good. "I understand the criticism and other attitudes in Montenegro, but on behalf of the government, I want to say that we should take a different path. The path where there are constant divisions is not the path of progression and we will not support it," Abazovic pointed out.

He also pointed out that the entire region has tried everything, except for agreements and cooperation, and that now is the time to take such a path and do it that way. "Issues that are unjustifiably held important, we should put off the agenda in a fair and democratic way," Abazovic concluded.