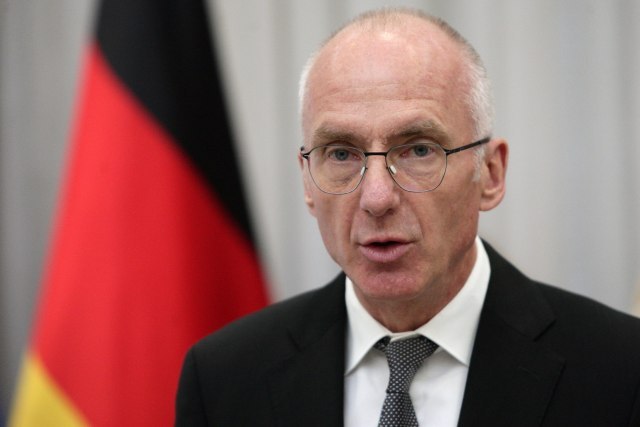 However, as he emphasized, harmonization with foreign policy, i.e. the introduction of sanctions against Moscow in order to preserve European values, and not against the citizens of Russia, will help Serbia progress in the EU integration process.

"Russia's invasion is a turning point, this terrible war must end as soon as possible. The EU has applied targeted sanctions that are a means and are not directed against the Russian people but serve as an instrument to defend values such as peace, democracy and freedom on which it is based. The EU, which unites us Europeans, is why countries like Serbia should join the measures, which would help Serbia progress in the EU integration process," Schieb said.

The ambassador emphasized that in addition to all that, the introduction of sanctions against Moscow must be a moral imperative. "Germany wants Serbia to be a member of the European family of common values, supports Serbia and its preparations for the EU, which means improving and strengthening the rule of law, strengthening and building democratic institutions, as well as supporting a democratic pluralistic society," Schieb said at the opening of the two-day gathering "Democracy - Minimal Consensus" organized by Crta, whose main topic is the three most important pillars of democracy - parliament, elections and the media.

Ambassador emphasized that Germany is convinced that the future of Serbia is in the EU, which, as he added, was also said by the German Minister of Foreign Affairs Annalena Baerbock and Chancellor Olaf Scholz in Belgrade.

Ambassador assessed the decline in public approval of EU accession as worrying and stated that one of the reasons for that was Europe's expectations about the introduction of sanctions against Russia and negative prejudices in certain media.

Ambassador pointed out that democracy is a very difficult job and that its strengthening requires a lot of strength and conviction, as well as that key actors, through sometimes difficult discussions, reach a common solution.

Schieb emphasized that he is convinced that the debate in the new parliament will be dynamic, because all parties participated in the elections, as well as that there will be a pro-European opposition.