BELGRADE -- President of the Republic of Serbia, Aleksandar Vučić, was hosted on Sunday Morning on TV Prva.

BELGRADE -- President of the Republic of Serbia, Aleksandar Vučić, was hosted on Sunday Morning on TV Prva. 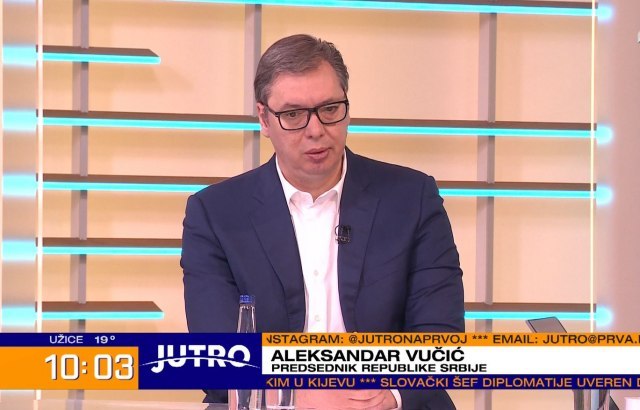 "I would start, if you allow me in a different way, to address the citizens of Serbia. Sometimes in these times, it is wiser to keep quiet regarding certain things", said Vucic.

When asked about sanctions, he said that such things cannot be viewed in isolation.

"People, do not act as if nothing is happening around us, and just waiting for us to live better, under the circumstances of an almost declared world war and world conflict," he said.

"My job is to be realistic, not to lie to people. I don't want to lie to people in the campaign and promise what can't be achieved. Whenever you listen to any television, I turn it off because I couldn't bear the fountain of wishes and the stories how they would endure, I can't listen to that", said the President of Serbia.

He said that everyone is against it and that he is against imposing sanctions to Russia, but that has nothing to do with running the country, he explained.

"The price we pay is huge"

"The price we pay is huge, we essentially have no access to the capital market," he said.

„Everyone would say that Vucic is announcing the introduction of sanctions. No, we will fight as long as we can to maintain our policy and we are pursuing that policy not because we gain something from not imposing sanctions. This is because I will listen to experts who are pointing out the costs of natural gas, which would be a loss of a billion, while now we are losing billions because of this, not to mention the reduced direct investments and that seven U.S. producers and actors refused to come to make films because we did not impose sanctions on Russia,“ said Vucic.

He stated that Serbia suffers a lot because it refuses to impose sanctions on Russia and that life in the country would be significantly better if the country decided to do so. However, he said that Serbia will not do this because it has its independent policy.

"When they say that they will not violate the integrity of Ukraine, and they are doing exactly that in the case of Serbia, then that is hypocritical", said Vučić.

"When Putin calls on the Kosovo issue, Serbia is the biggest victim"

"When Medvedev and Putin refer to the Kosovo issue, they have no other example than that one. It is not fair to us, but it is to them. They use only what they have. They have extracted a brutal violation of international law and now they are sticking to it", he said.

He explained that Serbia is the biggest victim in all this.

"It's easy to anyone, except to those who have to make decisions"

He says that the constant and growing pressures on Serbia and the talks he is leading are very difficult and that he is worried.

"Everything they say, they say three times worse, and I tell them what I tell you three times worse. Well, you can imagine what it looks like," he said about the pressures that Serbia suffers.

"And why would the behavior of Djilas be disputable compared to some others who also never say sanctions, and demand an increase in salaries and pensions. It's easy to anyone, except to those who have to make decisions," he said.

"Do they want to admit that what Russia has done is much worse than what Serbia has done, and still, they are not bombing Russia, as was the case with Serbia," said the President of Serbia.

He mentioned that foreign ambassadors cannot and will not lead the policy of Serbia. The essence, as he says, is to deprive Putin of the argument of Kosovo, and the fact that he will break his teeth because of Serbia is not important.

"I will ask German government's special envoy for the Western Balkans, Manuel Saracen why he did not refrain at least a little. Where is your logic. Serbia is a small country, but we are not idiots. Don't make us idiots," he said.

"You have to understand, they have America's support for everything. And then the British and Germans supported, the Germans the loudest. For them, Kosovo is a state because they trampled on it and that is why they will continue such a policy. As you can see, I tell them all those arguments straight into their faces. They know all that", he said.

When asked why he does not reveal the names of the countries that withdrew the recognition, he answered that it was done in such a way in order to protect Serbia's position.

"Because I do not want to put Serbia in an awkward position. Because there are already two countries that make clans that should work against the policy pursued by Serbia. I have four notes here, but I will not show them. We will continue to work on derecognitions... I will not give the territorial integrity of Serbia at any cost. Period", he said.

The visit was also announced on the president's official profile on Instagram.

"President of the Republic of Serbia, Aleksandar Vučić, will be hosted on Sunday Morning on Prva TV," reads the "Budućnostsrbijeav" profile.