BELGRADE -- President Vučić attends the demonstration of the capabilities of the Serbian Army "Shield 2022" at the airport "Colonel-pilot Milenko Pavlović" in Batajnica.

BELGRADE -- President Vučić attends the demonstration of the capabilities of the Serbian Army "Shield 2022" at the airport "Colonel-pilot Milenko Pavlović" in Batajnica. 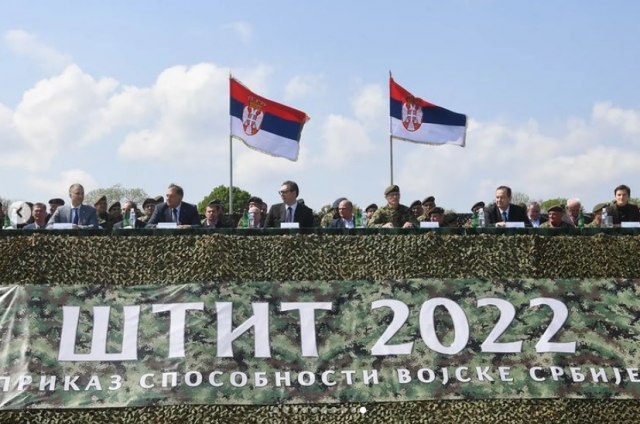 President of Serbia, Aleksandar Vučić, is attending the demonstration of the capabilities of the Serbian Army "Shield 2022" at the airport "Colonel-pilot Milenko Pavlović" in Batajnica.

Ministry of Defense and the Serbian Army are organizing a demonstration of a part of the capabilities of the Serbian military forces called "Shield 2022", and visitors will be able to see weapons and military equipment in a static and dynamic display.

"Having in mind that we have been able to invest more money so far and to equip our army with such modern means," he said.

As he pointed out, he is extremely satisfied with upgrading, such as equipment for divers, as well as other accompanying equipment. As Vučić said, all that is important. "Our helicopter units are getting stronger, we need more pilots, we will procure more helicopters," he said. "Today, everything went almost perfectly, I am pleased to have seen many children, but also older people who came to see how their army is progressing," said Vucic.

"We did not enter into negotiations with the Chinese side, let me say that right now. We have been in negotiations for 12 years for the purchase of 12 Rafale aircraft (a twin-jet fighter aircraft) and we will probably be ready to buy 12 new ones at the beginning of next year. I expect negotiations with the British side to start regarding the procurement of Eurofighter Typhoon aircrafts: We bought as much as needed, we bought for our money, when we have money - we will buy more", said Vucic.

"I am proud that people are proud of their army and their country, which has weapons that cannot endanger anyone, but can make our country safe and secure. I am tired of these stories about little Putin, and about us endangering someone", Vucic said.

A unit of the Serbian Army Guard handed over a report to President Vucic, and after that, a dynamic display of exhibited military equipment and weapons of the Armed Forces began.

The screening is attended by the Serbian member of the Presidency of Bosnia-Herzegovina, Milorad Dodik, Minister of Internal Affairs, Aleksandar Vulin, and President of the Assembly, Ivica Dačić.

Planes and helicopters of the Serbian Army took off, the show began.

A helicopter landing of Air Force paratroopers was shown, and then special forces teams took up positions to attack. They are also helped by the robotic platforms "Little Milos", and the "Cornet" missile system was shown.

"Mi-35" helicopters provide conditions for evacuating members of special teams via "Mi-17" helicopters. The length of the rope with which the helicopters pull out the injured is 40 meters, and with the help of it, up to 10 injured people can be pulled out. The super "G4 seagull" acts on enemy positions.

The Eagles provide support. "PASARS" and "Nora-52" howitzers, which are ready to act, were shown.

After the presentation ended, the President of Serbia, Aleksandar Vučić, looked at the exhibition of military equipment in Batajnica. He greeted the members of the Serbian Army and talked to them. "We are six times stronger than we were," said Vučić, observing the weapons on display.

Dodik: I am proud

"This is proof of how Serbia's combat readiness has progressed, I am honored to be invited here. Serbia with this army can defend its people and can be a deterrent. This is something that fills the hearts of all of us Serbs," said Milorad Dodik.

During the dynamic presentation, a dozen scenarios will show part of the operational capabilities of the aircraft in the airspace, using all types of aircraft available. It will be a good opportunity to show, in coordination and cooperation with members of the ground forces, part of the capabilities of not only the 63rd Parachute Brigade and the 72nd Special Operations Brigade, but also the fighter and fighter-bomber aircraft. A helicopter landing will be performed, and it will end with an air parade and a demo jump by members of the 63rd Parachute Brigade. The audience will be able to approach the new helicopters, but also to see up close what the special brigades of the Serbian Army can do.

They will show the new elements they apply in their regular training at the military airport in Batajnica.

An exhibition of military equipment has begun

An exhibition of military equipment has started at the military airport "Colonel - Pilot Milenko Pavlović" in Batajnica, where the Chinese medium-range anti-aircraft system FK-3 occupies a central place.

Citizens, for whom the entrance is free, will be able to see the exhibited military equipment until 3 p.m.

The exhibition will present almost everything that the Serbian Army, its land army, air force and air defense have on its disposal. A large number of people are still arriving at the Batajnica airport, and a large number of children are also noticeable.

The exhibition is organized by the Ministry of Defense and the Serbian Army (VS), and citizens can see the exhibited military equipment, but also come, get information and learn more about everything that has been purchased recently, from new systems to systems with which the Serbian Army already dispose of, but in the process of modernization.

Jankovic: FK-3 is a significant contribution to our air defense system

Brigadier General Tiosav Jankovic, commander of the 250th Missile Brigade for Air Defense, said that the FK-3 air defense system, which will be shown today at the "Colonel-Pilot Milenko Pavlovic" military airport in Batajnica, represents a significant contribution to the Serbian air defense system.

Janković stated for RTS that this is a modern missile system with a modern range that has exceptional tactical and technical characteristics and combat capabilities. "This system effectively destroys airplanes, helicopters, cruise missiles, but also high-precision high-speed air-land missiles, small dimensions and small reflective surfaces," said Janković. He stated that the system also has an exceptional ability to protect against electronic interference, that it can hit six targets in the airspace at the same time, and that it can guide 12 missiles. Jankovic pointed out that the greatest progress is the fact that it has a large zone of destruction, a range of up to 100 kilometers and a height of 27 kilometers.

"If we compare this with the systems we have had so far, with a range of up to 20, 25 kilometers, it is clear how the air defense system gained in quality. The FK-3 missile system brings the power to deter threats from the airspace, and in the case of the ability to neutralize all threats", stated Janković. He pointed out that the arrival of such a means represents a great challenge for the army and a strong moral incentive, and added that there are all the conditions for all our missile systems to function in conjunction.