BELGRADE -- Crisis Staff for combating coronavirus held a session in the Palace of Serbia. The decision has been made that all measures remain in force.

BELGRADE -- Crisis Staff for combating coronavirus held a session in the Palace of Serbia. The decision has been made that all measures remain in force. 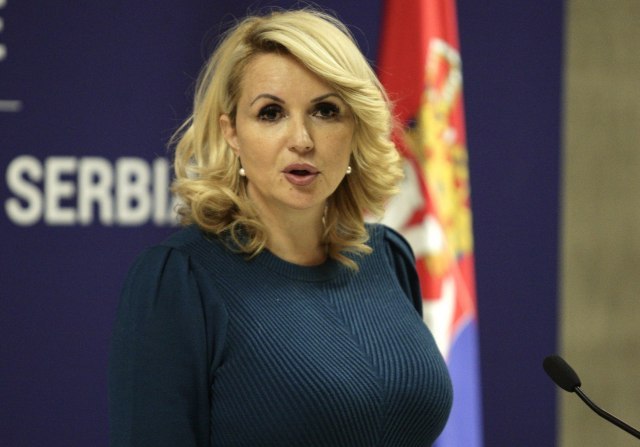 Crisis Staff member Darija Kisic Tepavcevic said there was a visible increase in the number of those infected in Belgrade.

As she mentioned, the decision of the Crisis Staff to extend the vacation was smart, and to start a vacation three weeks long, which will significantly affect the situation.

"This period is related to the period of celebrations," she noted.

She mentioned that all existing measures remain in force and that is the decision of the Crisis Staff. Kisic Tepavcevic also said that a certain number of falsified COVID certificates were discovered. "It is certainly in the interest of each of us to stay healthy and protect ourselves and our environment," she underlined once again.

Speaking about the atmosphere at the meeting, Kisić Tepavčević said that the discussion was as usual, and that the frequency of illness and death, occupancy of hospital capacities and the percentage of positive cases were considered.

"We have seen that the increase has been visible in Belgrade in recent days," she told reporters, adding that the effect of COVID passes had been analyzed.

Together, we have decided that the best measure at the moment is a three-week break.

"What we have all repeated is the holiday season, when we relax more and when it is a gathering period, and that is something that scares us all. We hope that everyone will do their best and influence at least one person in their environment to get vaccinated", she stated.

New wave after the holidays?

Asked whether a new wave is expected after the holidays, Kisic Tepavcevic said that the virus has changed several times and now it is estimated that more than 80 percent of those vaccinated are needed.

"It is important to show that vaccines are effective and safe, this is the beginning and the end of the fight against this virus. Any other situation is just exposure to potential infection," she said, noting that the best thing that can be done is vaccination.

According to earlier announcements, the main topics of the session are the appearance of the omicron strain of coronavirus in the country, as well as the upcoming holidays.

Medical part of the staff is in favor of introducing COVID passes that will be valid for 24 hours, which was previously stated by members of the Crisis Staff, epidemiologists Predrag Kon and Branislav Tiodorović. The profession warns that the omicron strain represents a real threat, due to its rapid spread, and that the control of the implementation of measures must be strengthened.

Minister of Health, Zlatibor Lončar, stated today that the epidemiological situation in Serbia is "tolerable", but that it is a matter of days when the number of newly infected will start to grow due to the appearance of a new strain of coronavirus called omicron.