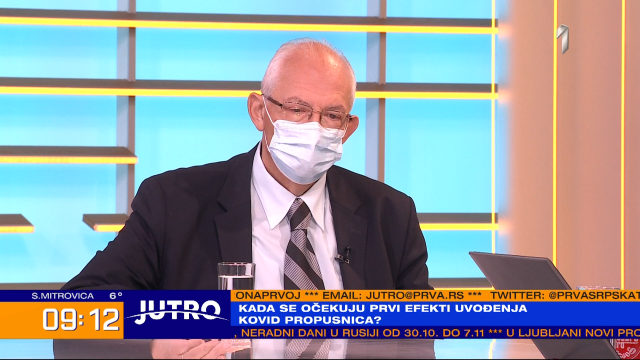 Kon welcomed the measures, but also said: I am not satisfied because I think that these measures will not be efficient enough.

His position is that they should have been brought back in July.

"We demanded that everything that is not necessary be closed after 5 p.m. And that public gatherings be banned after that time," Kon reiterated the attitude of the medical part of the Crisis Staff.

"As a Crisis Staff member and epidemiologist, I welcome the introduction of COVID certificates. It will be applied primarily in nightclubs. It is primarily a technical matter."

"The epidemiological situation has developed into a catastrophic one because you don't have a completely safe bed for the patients anywhere, patients have to be discharged earlier in order to get room for others".

It is important that education and preparation has been done for all inspections and communal police that will work on control. What matters is tighter controls, Kon said. He pointed out that it was insisted that it be made public who is violating the restrictions.

As for the first effects of the introduction of COVID-passes, he personally says that he is skeptical that the effects will be seen soon, because they are being introduced for facilities after 22 hours.

"We have a situation where we have a season of religious celebrations, winter months when this virus is very active. At least two weeks ahead of us we will face with a similar situation as now."

The population aged 20 and younger is now over 20 percent positive, the number used to be a lot smaller, which indicates that the virus has sharply threatens the population of school children, and we unfortunately have a fatal outcome.

"That's why I think it's a good question whether to introduce online teaching."

He points out that it depends on the data and education staff.

"The data say that children are primarily infected by their parents, bringing the virus to schools."

What is unfavorable is the fact that we approach the period of the year when we have numerous celebrations, weddings, where the virus is spreading rapidly.