BELGRADE -- President of Serbia, Aleksandar Vučić, met tonight with the delegation of the Swiss company Stadler.

BELGRADE -- President of Serbia, Aleksandar Vučić, met tonight with the delegation of the Swiss company Stadler. 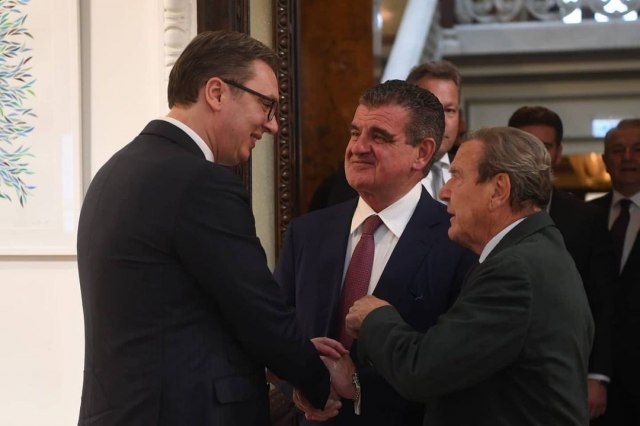 The company is interested in new projects in Serbia, as well as the opening of a transformer factory in our country.

Vučić talked at the Geozavod with the Stadler delegation led by the owner of the company, Peter Spuhler, with whom the memorandum between Stadler and the Government of Serbia was signed by the Minister of Construction, Tomislav Momirović.

The memorandum envisages significant financial assistance from Stadler to the Railway Museum, and is intended for the development and promotion of the museum.

Stadler, one of the world leaders in the production of rail vehicles, from which Serbia will procure three high-speed trains, is also interested in opening a transformer factory in Serbia, as well as long-term strategic cooperation in terms of selling trains to our country.

Vučić: In a wonderful ambience about Stadler's future investments in Serbia

Also, the topic of conversation was the potential placement of their products in Serbia and the countries in the region, and they also discussed the possibility of Stadler opening a vehicle factory in Serbia. The meeting was also attended by the Prime Minister of Serbia, Ana Brnabić, the Minister of Finance, Siniša Mali, as well as the former German Chancellor, Gerhard Schröder, a friend of Peter Spuhler.

At Geozavod, guests from Switzerland were introduced to Serbia as an investment destination.

Minister of Construction, Transport and Infrastructure Momirović held a presentation on the directions of development of the Serbian railway and potentials for cooperation with the Stadler company.

"Stadler's first fast train arrives in five months, it will go 200 per hour"

Also, during the meeting with the Stadler delegation, the Belgrade Waterfront project was presented. In addition to Peter Spuhler, the Stadler delegation also includes his son Lukas Spuhler, who is actively involved in the company's operations and current projects, Željko Davidović, Stadler's sales manager for Central and Southeast Europe, a Serb from Mrkonjić Grad, and Ansgar Brockmeyer, in charge of sales and marketing and Deputy General Manager Stadler, as well as the Ambassador of Switzerland in Belgrade Urs Schmid.

Spuhler, representing his company, said that they have a very short deadline to deliver three fast double-decker trains to Serbia, that it is a very challenging job for them, but he promised that everything would be finished properly and on time.

Railway in late February; Vučić: I can't wait to get on the fast train

He also confirmed that the company is looking for a location to build a new transformer factory. It was announced earlier that Stadler would deliver the first fast train to Serbia by the end of October, and the second and third by the end of the year. The procurement of three high-speed trains from Stadler through a tender is worth 62 million.

"From Belgrade to Novi Sad for lunch, in half an hour and 1.000 dinars or less"

"This is a confirmation of Serbia's success in the financial sense. I would like Mr. Peter Spuhler to build that first factory for transformers, and God willing, the next one as well," Davidović pointed out. Minister Momirović said during the presentation that Serbia wants to connect the entire region with projects for the development of transport infrastructure and that large investments have begun, the largest of which when it comes to railways is the construction of a high-speed railway from Belgrade to Budapest through Serbia via Novi Sad to be ready by the end of this year.

On that occasion, the Minister told Tanjug that this is a great day for Serbian railways and the economy, since Stadler has shown interest in opening two factories in Serbia.

"Trains will be BMW on the tracks"; Soon the end of works, an important connection between the two cities

"We bought three Stadler train compositions, which are the best trains that exist in Europe, and they will arrive in Serbia by the end of the year, and in February they will be used commercially on a route from Belgrade to Novi Sad," Momirovic said, reminding that these trains will go at a speed of 200 kilometers per hour. He added that the people from Stadler recognized the potentials of Serbia and that is why they came to Belgrade today.

"They showed interest in opening two factories here, one is a factory of trains and rolling stock. We will definitely need more trains in the coming years," Momirovic pointed out.

Vojvodina 200 per hour by train: Look at the newly built tunnel and viaduct as tall as an eight-story building

He said that after the loading of Serbian railways from 2014 to 2019, 48 new train compositions were purchased and that three high-speed trains are now being purchased. The Minister added that the countries in the region will have to follow us when it comes to the development of the railway, as well as that the Serbian railways will in a short time, in one part, look like the railways in France and Austria.

Momirovic said that the entire Bar railway in Serbia will be renovated.

How will the new railway change the way Novi Sad citizens travel?

Earlier, President Vučić stated that he could hardly wait for the release of the high-speed railway from Belgrade to Novi Sad, which will be at the end of February, and to board the high-speed train that Serbia bought from the Swiss company Stadler.

Vučić said that the railway would be completed even before that, but that a driving test would be performed after the completion of the works.

As a reminder, in 2014, Serbia procured 21 electric trains for the Serbian railways from Stadler, which were used on regional railways.