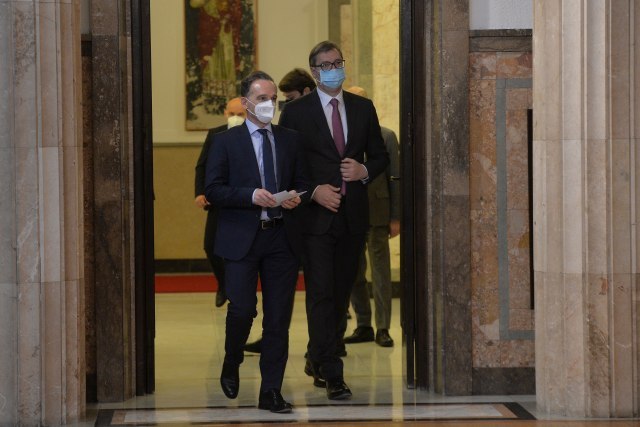 Is Serbia going to give away those surplus vaccines to others who do not have enough of them?

"We received 57,000 of the planned 96,000 doses from the Covax program; another 36,000 doses from the EU, but given the proportion to the population number, we needed 260,000 vaccines. We agreed with that distribution because those vaccines are more important to others. I would like to thank the EU and Covax," Vucic said. He noted that apart from the Chinese Sinopharm, Serbia received some 250,000 Pfizer doses more than Russian vaccines.

"Serbia started vaccination at the end of December with the Pfizer vaccine, and only then we received vaccines from Chinese and Russian partners. We get all doses exactly according to the agreements we have with Pfizer and Sinopharm, there is a slight delay with others, but I will not comment on that now," Vucic said.

"We have enough vaccines, but we have another problem that is being ignored - various anti-vaxxer groups. People who don't want to receive them because of various conspiracy theories. But we are probably also to blame since we have enough vaccines so people are in no hurry," president Vucic said.

"In EU you have queues, but you don't have them here. Even today, you have four types of vaccines at disposal, and if you wish, all you need to do is just go and get vaccinated," Vucic told a DPA journalist, emphasizing that the possibility of vaccinating foreigners in Serbia is one of the ways in which Serbia helps all countries in the region.

He also noted that since the beginning of the pandemic, Serbia has sent about 120,000 vaccines to the countries within the region, while in Serbia itself, some 65,000 citizens from those countries got vaccinated, announcing that the vaccination process will continue, because no country can solve this problem alone.

"We believe that the vaccines are just as important for our neighbors as they are for us. Because if they have a difficult situation, whatever we do becomes pointless," Vucic said.