PODGORICA -- Montenegrin President Milo Djukanovic said that official Belgrade interpreted the results of the Montenegrin elections "by the logic of the conquerors".

PODGORICA -- Montenegrin President Milo Djukanovic said that official Belgrade interpreted the results of the Montenegrin elections "by the logic of the conquerors". 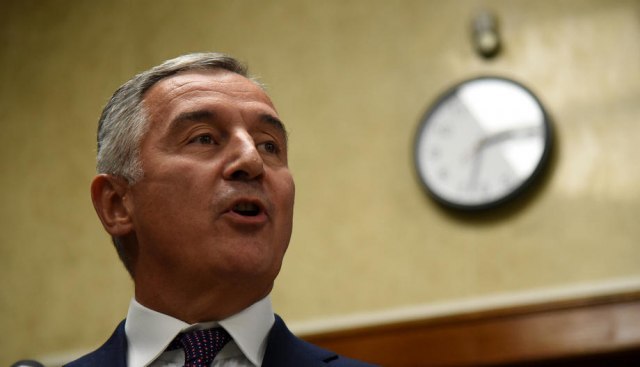 The President of Serbia, as he states, "by appropriating the Montenegrin history" wants to bridge the missing part of the history of Serbia.

In an interview with Podgorica's "Pobjeda", conducted by Montenegrin journalist Tamara Nikcevic, Djukanovic claims that the defeat of his DPS in the August elections is being used by Belgrade "as an open door to continue its mission of making Montenegro Serbian and changing the character of the civil state".

"Since the goals of Greater Serbia nationalism in Montenegro have not yet been achieved, it can be said that nervousness in the presently only DF headquarters - in the state leadership of Serbia - is on the rise. Especially since the new Montenegrin government is not playing to their music", stated Djukanovic.

According to him, official Belgrade would like a cleaner model, to, as he says, govern Montenegro through its political troops. The leader of the now opposition DPS and the head of the Montenegrin state claims that Belgrade is annoyed that his party, which, as he says, he sees as the only relevant political barrier to the conquest of Montenegro, is not losing public support as they expected.

Speaking about the intentions and resources allegedly used by the Serbian president to remove him from power, Djukanovic says that "the capacities of the president of Serbia are overestimated", which, as he states, goes hand in hand with his (Vucic's) illusion that he is close to conquering Montenegro. "

"But it's not! I won 54 percent of the votes in the presidential elections; I am at the head of the party that has thirty mandates and which exercises power in the largest number of Montenegrin municipalities. So: take it easy!", Djukanovic said.

He accuses President Vučić that by "appropriating Montenegro" he wants to bridge the missing part of the history of Serbia, and adds that this will never have any impact on the length of his political life and on the future of Montenegro.

The head of the Montenegrin state also claims that after the 1990s, when, as he says, "the spirit was released from the bottle towards Croats and Bosniaks, and later towards Albanians, it was now Montenegro's turn."

"That is why they are preparing for the" Kosovo battle "in Niksic; that is why the census, according to Belgrade officials, is a matter of the greatest national interest of Serbia in Montenegro: to present Montenegro as a Serbian state with identity engineering. After that, the coalition Democratic Front (DF) could overthrow this government, free it from depending on the "honest Albanian" and form a real Serbian government with the leaders of the DF in it", Djukanović stated.

Accusing Serbia of "continuously producing unhealthy relations with its neighbors," Djukanovic says it is a "dangerous game" that in the 1990s "even larger political players than nowadays have failed to control."

"And we know how it ended: in genocide and in The Hague," Djukanovic claims.

He spoke again about "two influences of Greater Serbian nationalism in the electoral process in Montenegro", with, as he says, a clear diagnosis that the government in Serbia is behind both, which thus served Russia's strategic interests in the Balkans and Europe.

"The first line was political, through the DF, whose leaders are puppets at the end of the government in Serbia. The second line is the Serbian Orthodox Church. It is a bit more complicated to understand, but not too much," says Djukanovic.

Asked to clarify in what sense it is more complicated, Djukanovic claims that the top of the Serbian Orthodox Church, like the DF, is an instrument for "manipulative management by the state leadership of Serbia".

Djukanovic also fears that by reviving "the idea of a Greater Serbia, now called the "Serbian world", it clearly aims at changing the character of Montenegro, which, as he stated, instead of the previous multiethnic, secular, pro-European country, a NATO member", would become a necessary part of the Greater Serbia triangle Belgrade-Banja Luka-Podgorica".