BELGRADE -- In the Serbian Parliament, the prime minister-designate, Ana Brnabić, started presenting exposé and proposed the members of the cabinet.

BELGRADE -- In the Serbian Parliament, the prime minister-designate, Ana Brnabić, started presenting exposé and proposed the members of the cabinet. 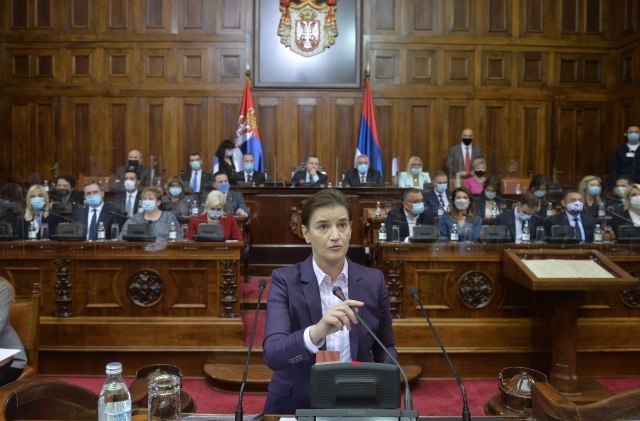 "For the second time, I have a huge honor to stand before you and ask for support for the agenda that I am proposing for the Government of the Republic of Serbia in the coming period. Serbia is a fundamentally different country than it was back in 2014," she said.

She adds that our state is respected in the international framework.

"At the international level, Serbia has become a country that is highly respected and esteemed. A country that pursues an independent and autonomous foreign policy, a reliable partner for talks, and not a country that is subject to conditions and ultimatums," she said.

As she says, Serbia is a financially stable country.

"A country where unemployment is at a historically low level, a country where the average salary is more than 500 euros and where salaries and pensions are constantly growing," says the prime minister, adding that we should all be proud of that, as well as what has been done in the last 6 to 7 years have been anything but easy.

The six goals of the new government

"This government will have six goals that it will pay special attention to - the fight against COVID, Kosovo and Metohija, the fight against organized crime and the war against the mafia, independent decision-making by Serbia, the rule of law and accelerating reforms and further economic strengthening of Serbia," she said.

She added that the new government, in accordance with the needs, challenges we face and the results, will open new topics that will further contribute to the strength of our country and the quality of life in it.

She pointed out the fight for the health of the citizens of Serbia as a priority.

"The first priority before this government is to protect human health and support the health system in the fight against coronavirus. We have hard days and a hard winter ahead of us and another difficult year in which we will have to continue this fight. We expect that the world will not be able to return to some kind of normalcy", says Brnabić and adds that Serbia must make progress in all that.

In the exposition in front of the deputies, she emphasized that it is necessary to build further on the achieved results, and each of the ministers will have their own priorities in their portfolio, while the government will have the basic directions of action.

In some areas, according to her, Serbia has only gone further in the past three years and changed faster than many European countries.

"Since 2017, Informatics has been a compulsory subject in primary schools since the 5th grade, when students start learning block programming, while from the 6th grade, they also learn text programming, only to encounter elements of data science in the 8th grade", she explained.

Brnabić pointed out that the subject Digital World was introduced for the first-graders this school year, through which they learn from an early age to understand the world in which they live, and to be more ready, versatile and with more self-confidence than their peers in other parts of Europe and the world.

"In high schools, almost 2 percent of students go to specialized IT classes. We have provided Internet access in all primary schools and we have invested an additional 10 million euros in high-speed Internet access for 1.000 schools. Today we have 10.000 digital classrooms, and full digitalization of schools must be completed by 2022", Brnabic said.

As she added, the new government will not give up on the idea of the Community of Serbian Municipalities (CSM).

"We will have huge political challenges, and here I am thinking primarily of our relations with Pristina, the continuation of the dialogue on normalization and the problems in establishing the Community of Serbian Municipalities, which we will not give up the living conditions of the Serb population in Kosovo and Metohija and support for the return of internally displaced persons", she said.

He points out that the government will coordinate all its activities and moves with the President of Serbia, Aleksandar Vučić, and the representatives of the Serbian people in Kosovo and Metohija, on this important issue, which is the biggest challenge for the long-term sustainable security and stability of the entire region.

"National and political unity on this issue is our absolute priority," Brnabic concluded.

She also spoke about the organized fight against crime.

"We are facing a serious and difficult fight against organized crime, the mafia, which thought that it was stronger than the state and that it could govern this state. Our job is to show that the state is always stronger, that there is no playing with institutions, that connections between the representatives of the institutions and the criminals will not be tolerated and that none of them will be protected", she said and added that the participation of all branches of government, and above all the judiciary, will be necessary.

As she says, there are two key points where we will make a decisive blow to organized crime - cutting off their sources of funding and breaking their network of influence in state bodies, politics and the media.

Education remains one of the new government's key priorities

Brnabić emphasized that education will remain one of the key priorities of the new government, and that work will be done on strengthening human capacities.

"From April next year, Serbia will have a unique education information system for the first time," Brnabic emphasized in her exposition in the Serbian Parliament.

She added that for the first time, Serbia will have a clear overview of the entire education system, which will enable informed decisions to be made on strategic investments, in order to adequately respond to the needs of Serbian society and economy.

As she explains, in Serbia, it will be known exactly how much money the state has invested in the formal education of every citizen and how to improve the effects of those investments.

"In the coming period, we will additionally support the development of preschool education by increasing investments in kindergartens, equipping preschool institutions and supporting professional staff," Brnabic pointed out, emphasizing that the introduction of dual education in higher education institutions and the completion of the new education strategy are important tasks for Serbia.

As for the Serbian diaspora, Brnabić reminded that in the previous mandate of the government, the procedure for recognizing foreign diplomas was simplified, the Decree on customs privileges was changed so that people from the diaspora could return to Serbia without paying customs duties on their own property.

"The government I am proposing is pro-European"

The prime minister-designate said it was important for her to stress how pro-European the new government was.

"Our task is to accelerate the process of European integration in the coming period. Changing the Constitution of the Republic of Serbia in the field of justice is a necessary step in further strengthening the rule of law and further harmonization with the European acquis and European standards," she said.

She announced support for changes to the Constitution in the field of justice.

"In the previous mandate, the Government of Serbia, after extensive public consultations that lasted a little over 18 months, as well as consultations and support of the Venice Commission, sent an initiative to the Assembly to change the Constitution so that our society has a judiciary that is independent of any influence. We will continue to support changes to the Constitution in the area of ​​justice in order to find the best solutions for our legal system," she said.

She points out that it is important for our society to have a judiciary that is independent of all political influences, but also much more efficient and responsible towards citizens.

When it comes to the media sphere, the Media Strategy for the period until 2025 was adopted, she reminds.

The government, she says, did the job in partnership with media and journalists' associations, whose representatives made up half of the members of the Working Group for drafting the Media Strategy.

According to Brnabić, the transparency and inclusiveness of the whole process were supported by partners from the OSCE Mission to Serbia, the EU Delegation to Serbia, the Embassy of the Kingdom of Norway and the Konrad Adenauer Foundation.

She adds that the same working group continued to work on the Action Plan for the implementation of the strategy, which, as she points out, will be one of the first documents on the agenda of the new government.

Prime Minister-designate Ana Brnabić proposed ministers for the new composition of the Government of Serbia.

"The future government of Serbia, if we get your support, will have 21 departments and 2 ministers without portfolios. I am proud of the fact that we have 6 completely new ministers and as many as 11 women who will lead some of the most complex departments in the government," she said.

- Branko Ružić, for the First Deputy Prime Minister and Minister of Education, Science and Technological Development

- Zorana Mihajlović, for Deputy Prime Minister and Minister of Mining and Energy

- Nebojsa Stefanovic, for Deputy Prime Minister and Minister of Defense

- Maja Gojković, for Deputy Prime Minister and Minister of Culture and Information

- Siniša Mali, for the Minister of Finance

- Irena Vujović, for the Minister of Environmental Protection

- Tomislav Momirović, for the Minister of Construction, Transport and Infrastructure

- Tatjana Matić, for the Minister of Trade, Tourism and Telecommunications

- Maja Popović, for the Minister of Justice,

- Marija Obradović, for the Minister of State Administration and Local Self-Government

- Gordana Čomić, for the Minister of Human and Minority Rights and Social Dialogue

- Aleksandar Vulin, for Minister of the Interior,

- Nikola Selaković, for the Minister of Foreign Affairs

- Jadranka Joksimović, for the Minister for European Integration

- Zlatibor Lončar, for the Minister of Health

- Darija Kisić Tepavčević, for the Minister of Labor, Employment, Veterans and Social Affairs

- Radomir Ratko Dmitrović, for the Minister of Family Care and Demography

- Vanja Udovicic, for the Minister of Youth and Sports

- Milan Krkobabić, for the Minister of Village Care

- Nenad Popović, for a minister without a portfolio

- Novica Tončev, for a minister without a portfolio.