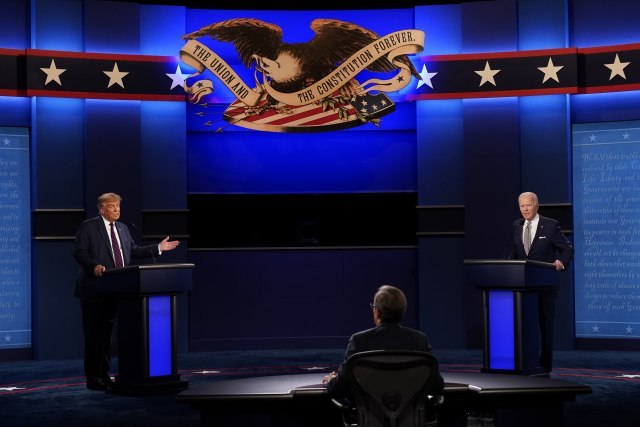 Incumbent President Donald Trump, on behalf of the Republicans, and Democratic candidate Joe Biden, stood facing each other. The debate was held in Cleveland, and it is the first of several that will be held before the day when the citizens of America will choose who will lead them in the next four years.

Even before the start of the "clash", it was clear that there would be no ordinary debate because Trump asked for Biden's hearing ability to be examined, due to the presence of electrical devices.

The moderator of the debate, which was estimated to be followed by 100 million Americans, was Fox News anchor Chris Wallace, who had, to say the least, a handful of work.

The two candidates did not shake hands due to respect for social distance, and the TV duel soon became very heated, and according to numerous commentators, it grew into the most chaotic debate in recent history, the Voice of America reported.

Biden called Trump a "clown", "racist" and "Putin's pawn", while Trump sent a series of insulting comments to Biden about his family. And that is only a part of the repertoire that the two candidates presented.

Candidates often shouted, and President Trump interrupted the former vice president while moderator Wallace was trying to restore order. At one point, Biden said to Trump, "Will you shut up, man?"

In the first debate, Trump and Biden sharply opposed their views on key issues for the future of the United States, coronavirus, the Supreme Court, taxes, racial unrest...

Biden accused Trump of adding fuel to the fire of racial unrest in America. Trump responded by claiming that the Democrats would destroy the United States if they won.

"You are the worst president America has ever had," Democratic presidential candidate Joseph Biden told rival Donald Trump during the first of three debates ahead of the November presidential election.

"Everything he says is a lie. I'm not here to call him a liar, everyone knows he's a liar," Biden said.

Trump intervened by telling Biden that he was the one who was a liar.

At one point, the insults became deeply personal when Trump suggested Hunter Biden, the Democrat's son, had been thrown out of the military for cocaine use. Biden said his son "had a drug problem" but had "fixed it".

Trump was asked if he would encourage his supporters to be peaceful if results of the election were unclear. "I'm encouraging my supporters to go into the polls and watch very carefully," he responded.

Trump defended his effort to swiftly fill a US Supreme Court seat to cement a 6-3 conservative majority on the bench, saying: "We won the election and we have the right to do it".

The two candidates are scheduled to meet next in two weeks, on October 15, for the second debate in Salt Lake City, Utah.

The Trump-Biden debate, moderated by Chris Wallace, is about to begin. Follow for a video thread. pic.twitter.com/njxCUv51ug

Biden said Trump had "panicked" over the coronavirus pandemic, which has killed more than 200.000 Americans.

"A lot of people died and a lot more are going to die unless he gets a lot smarter, a lot quicker," Biden said.

Trump also replied that his administration is doing a great job and that "we are only several weeks away from getting the vaccine."