BELGRADE -- Today, in Pranjani near Gornji Milanovac, we confirm the strength of friendship with our American, British and Canadian allies from the Second World War.

BELGRADE -- Today, in Pranjani near Gornji Milanovac, we confirm the strength of friendship with our American, British and Canadian allies from the Second World War. 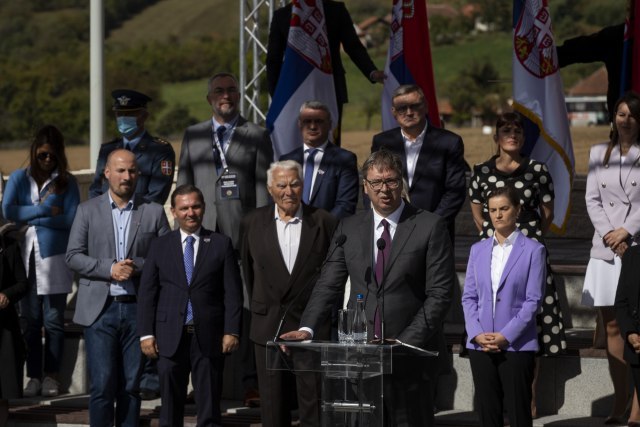 This was announced by the President of Serbia, Aleksandar Vučić, on his Instagram profile "Budućnostrbijeav".

Vučić also published his photo from the plane on the way to Pranjani.

The 76th anniversary of the World War II Operation Halyard, during which more than 500 Allied airmen and crew members were rescued, was marked on Friday in Pranjani village, central Serbia.

An airport will be opened on Galovića field, in Pranjani, as part of the Halyard mission.

The ceremony was open by John Capello, retired US Air Force officer and Halyard Mission Foundation President, who paid respects to the pilots killed in the jet fighter crash a day before.

“We will always respect the past and build the future together,” he underlined.

David Tabor, Commanding General at Special Operations Command, Europe, said it was necessary to work together to overcome all challenges. “This is an important day and we must remember the ordinary Serbs, who did the impossible in 1944. Your predecessors risked their families to save the Americans...although they were threatened by horrible retaliation,” he added.

Vucic also addressed the event, saying that the people of central Serbia showed courage and that the Serbs then became the brothers in arms with Americans, Englishmen and Canadians.

"We had the largest number of wars in the 20th century. The Serbian people proportionally lost the most people. Today, there are far fewer of us than there would be. But we have always proudly guarded our homeland and claimed to preserve the honor of the Serbian nation," says Vucic in Pranjani.

However, as he further states, we have always found a way to share and think the worst of each other.

"That time has passed and I am convinced that the time of our unity has come. It is important that we are united when it comes to Serbia. That is why it is very important for us to preserve peace, to have more children in the future. Serbia has no future if we do not think about it. Where life is best, we have the fewest children," Vucic said.

He thanked Trump once again, and stated that he was convinced that the President of the United States would visit Serbia and try Šumadija brandy on that occasion.

He said everyone could find a reason to blame the another because this relationship changed during the 1990s, especially in 1999 after the NATO bombing of former Yugoslavia.

The President of Serbia, Aleksandar Vučić, said today that Serbia is ready for talks with Priština, for difficult solutions, but he also added that "two are needed for tango".

In Pranjani, Vučić said in a statement to the press that Serbia was and remained ready for talks, regardless of the fact that some others were not.

"Unlike them, I can't play blaming games. Something has to change in the society in Pristina, to understand that only a compromise solution is a solution and that it won't happen that someone takes a hammer and hits me in the head or Serbia, so Serbia will be forced to recognize independence," he said.

He told Pristina to sit down and think about what could be an essential, compromise solution.

"We are ready for talks and difficult solutions, because there are no easy ones," he concluded.

When asked who came up with the idea to name Lake Gazivode after the American president, he states:

"Our people in Kosovo love Trump. How can anyone not understand that, they experienced the worst hardships during the previous administrations. As far as I have seen, people made it themselves. What do you think - that we should kneel before those who bombed our country? We won't do that, and I'm not ashamed to say it."