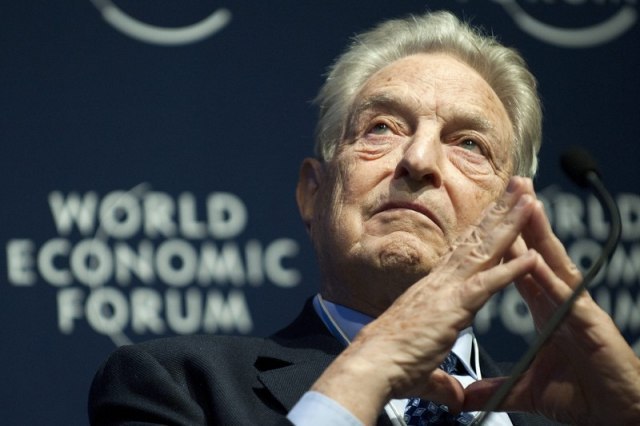 Is there any truth in all this, Deutsche Welle asks in the text "George Soros, the ruler from the shadows?"

He is one of the leaders of the secret world government. He pays with his money for a huge network of supporters all over the world. They present themselves as journalists, activists and civil rights advocates, but are actually his agents. Furthermore, he manipulates important politicians as he pleases. Its goal is to rob entire nations of their cultural and national identity, and force them into the bondage of eternal payment of debts. With his speculations, he has already put millions of people in trouble, and he also plans to replace the population of Europe: instead of Christian natives, he wants to settle Muslim newcomers there. Whoever opposes all his intentions is called a liar and slanderer by the international public.

Perhaps all these accusations against the American stock market speculator, billionaire and philanthropist of Hungarian-Jewish origin, George Soros, would not be worth mentioning at all if they were spread by anonymous nationalists on obscure social networks. But all these are quotes from the Prime Minister of one fundamentally democratic member of the European Union: Hungarian Prime Minister Viktor Orbán. And he is by no means the only member of a government, especially in the east of the EU, from whom such statements can be heard. Even today, when this Wednesday (August 12) Soros celebrates his 90th birthday.

George Schwartz, as he was called when he was born in Budapest in 1930, realized in the 1980s that it was not enough just to overthrow the communist regimes in the East. It is an even more difficult task to create a civil society that will know how to appreciate and transmit the values ​​of democracy - through education, public engagement and the promotion of the values ​​of civil society. That is how his "Open Society" foundation was created, into which he poured billions of his own property. But of course, with such engagement, he also gained enemies among those who only wanted to replace the communist symbols with nationalist symbols - and to continue to pursue the same policy as in the time of the dictatorship.

It is absurd that one of the Hungarian young men helped by the George Soros Foundation was Viktor Orban. But that is exactly why the Hungarian Prime Minister is an even more bitter opponent of that billionaire. Orban's attacks do not stop even today: in Hungary, a kind of "survey" is being conducted among the citizens, in which they are offered three possible answers. Of course, only one is "real" - and the question was raised about Soros' initiative to give unlimited loans to countries affected by the coronavirus pandemic. But the question alone shows how Orban's party interprets this initiative: "Are you rejecting George Soros' plan to indebt our homeland indefinitely, including eternal payment of interest?"

Soros is constantly slandered, not only through misinterpretations, but also through pure lies. Just one example: as many as two-thirds of Hungarians surveyed thought that in the 2018 parliamentary elections, Soros was running in Hungary as a candidate - but also because of how often Orban mentioned him in his campaign. But such a party never existed, nor did it ever occur to Soros to run in Hungary.

The accusations therefore do not cease. Are there any truths in them after all?

A speculator who led millions of people to ruin

George Soros was a speculator for half a century. He has developed an entire strategy on high-risk securities - and many funds will follow suit later. And he became really famous only with his speculation against the British pound, when his company earned almost a billion dollars in a short time. Of course, that speculation was directed to the detriment of the British economy, and some companies there had to declare bankruptcy because of that.

But the only thing Soros did in fact was his assessment that the government in London recalculated terribly in estimating the value of the pound according to the then newly created "package" of the European Monetary System (EMS), a fixed exchange rate. The "culprit" was, at best, primarily the British Minister of Finance, and later the Prime Minister John Major. But he was not the only one who led to "Black Wednesday", on September 16, 1992, when there was no other solution but to reduce the value of the pound - according to the US dollar, it would be as much as 25 percent in the next five weeks. It cost London dearly - he had to leave EMS, but Soros would also have to pay very dearly if his assessment was wrong. But it's not. Moreover, it is Soros who is now advocating for strict rules on the securities market so that such a collapse would not happen again.

Criticism of Soros as being a "shark in the world of finance" does not stop there: for example, it is pointed out that he puts his money in tax havens (exactly: in the Netherlands Antilles and the Virgin Islands, but that was in the late sixties - and it is absurd for something like that to accuse a man who later spent his own billions for the betterment of societies). He was also convicted for speculating on the shares of the French bank Societe Generale - but the whole accusation was reduced to the claim that he had confidential bank data. Of course: in speculation, gold information is valuable, but you need to know how to find and evaluate it.

And that was only about two million dollars, which is an almost insignificant amount compared to what he left to his foundation. Soros himself admits: "I like to make a lot of money so that I can spend it for good purposes."

Since the eighties, the Open Society Foundation has really launched a whole bunch of projects in building a democratic society, human rights, education and health. Of course, he started in his native Hungary, but his activity quickly spread throughout the former socialist countries. During its existence, his foundation spent about 15 billion dollars for that purpose, but there was never any "network of agents". Meetings of regional associates were held to exchange experiences, but for a long time Soros himself realized that activity in Eastern Europe - for example in Georgia - is certainly important, but that in our time, unfortunately, we must work on building democratic institutions in the United States itself.

When it comes to Hungary, there is almost no non-governmental organization in that country that is still completely dependent on the "Open Society" foundation. But even if it existed, it is not prohibited under current Hungarian law. Moreover, even among non-governmental organizations, the Open Society Foundation is considered open and transparent.

Viktor Orban does not hesitate to declare the refugees who set out for Europe in 2015 as "Soros's plan" for the Old Continent to be inhabited by a possibly "more flexible" Muslim population from the Middle East instead of European natives. The only thing Soros really said was that he expressed that as a man he was affected by the fate of those people - but also by the fact that some European countries, such as Hungary, stubbornly refuse to accept those migrants. Soros advocated for a fair distribution of migrants among EU members, but he also limited their number to one million a year. He later reduced that number to 300.000. This could hardly be called a "population replacement" of the European Union, which has approximately 440 million inhabitants. Moreover, Soros himself advocated for better control of the borders of the European Union - and that is a request that can be heard regularly from Viktor Orban.

Is that the reason for the Hungarian nationalist politician - and there are such people in Bulgaria and other EU countries - to stop attacking George Soros? Quite the opposite: outright lies can obviously be used to demonize that philanthropist - just for the sake of staying in power.