"Overcoming the virus is getting closer, if we are disciplined" VIDEO

BELGRADE -- Nikola Nikodijevic, the mayor of the City Assembly, expressed his gratitude to the vast majority of Belgrade citizens who respected the longest curfew so far

"Overcoming the virus is getting closer, if we are disciplined" VIDEO

BELGRADE -- Nikola Nikodijevic, the mayor of the City Assembly, expressed his gratitude to the vast majority of Belgrade citizens who respected the longest curfew so far 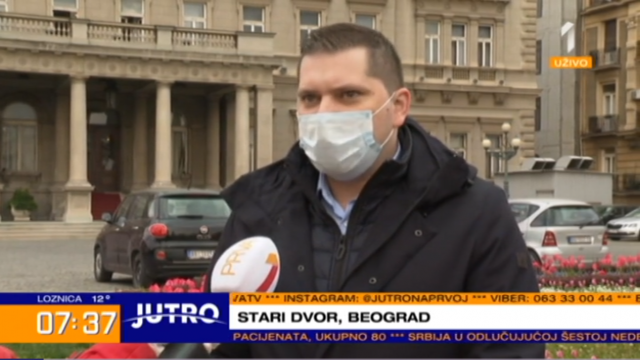 He added that if we are disciplined for the next ten days, we are very close to defeating the virus.

Nikodijevic told TV Prva that the City is ready to adjust the functioning of the system if a decision is made to keep the ban on movement before the coming holiday longer, the city government said.

"Based on that decision, we will adjust the life of the city, which means that the citizens of Belgrade can go to shops, duty pharmacies, post offices, and certainly large markets have already prepared well and it is known exactly how many people can be present in the facility," Nikodijevic pointed out.

He recalled that the city's utility systems are functioning effectively, adding that the Bureau for Biocides received additional funds and manpower, vehicles and equipment, and that they were able to disinfect about 100.000 square meters of space over the weekend, primarily health and social care institutions.

He added that more than 1.000 public transport and ambulance vehicles were also disinfected and that in parallel with this, the Biocides Institute had started the pest control in the municipality of Cukarica as well, and that it would continue to do the same in other municipalities.

Nikodijevic emphasized that if a person has a health problem during the restraining order, they can certainly be transported to the nearest health care facility, and that the police will help them reach it.

"The health of the people is of utmost importance to all of us, and those who try to trick the state will be sanctioned," Nikodijevic said.

He added that if someone has a broken pipe or any other malfunction during the curfew, one can call Beokom for the service or utility company in charge because, as he said, life in the city has not stopped.

As for the corridor transportation of citizens, the spokesman of the city parliament stressed that it functions without problems and reminded that two more lines were added.

He said that 261 vehicles came out on 34 corridor lines this morning, and in addition there are 113 buses that GSP directly contracted with large systems to transport their employees.

He added that the new temporary hospitals are ready to receive patients, but also hoped that there would be no need for that and urged citizens to be a little more patient and disciplined, because, as he says, our perseverance will be rewarded because we have a high chance of coming out as winners from this situation.