"Just imagine a million pensioners on the streets, this would not be Wuhan but worse"

"Just imagine a million pensioners on the streets, this would not be Wuhan but worse" 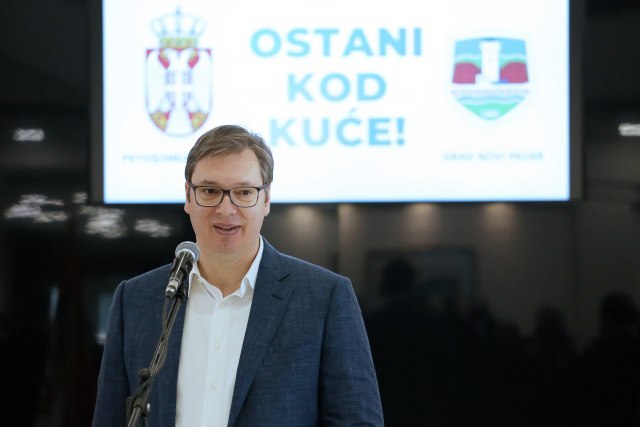 He states that they should do so regardless of their political affiliation.

He said that we should just imagine if more than a million pensioners would take to the streets in an hour. "Imagine what that would turn into, it would not be Wuhan, Italy or Spain, but a unique case in the world, all these cases, plus New York and then five times," Vucic said.

He responded to a reporter's question by commenting on the statement by Party of Freedom and Justice leader Dragan Djilas that he had no reason to fear and panic when it came to the coronavirus and did not understand why the pensioners could not even get out.

"I have seen and listened to worse things these days and I will only answer that today is not the time for that, but to fight for the lives of people, for respirators, for the masks...", Vucic told reporters in Novi Pazar.

He reiterated that he did not want to enter into political debates and that, as far as politics was concerned, "there would be days for a contest and comparisons".

"The responsibility of the President of the Republic is, you will agree, much greater than the responsibility of those who will never assume this role," he observed. "I ask people to listen to the government and the doctors, no matter who they like or dislike, as by doing so, they will preserve themselves and their families," Vucic said.

He did not want to answer any questions regarding the comparison of the sexual affair of the editor of a portal owned by Dragan Djilas with the Jutka affair, although, he says, he would have a lot to say about it, and any reported violence against women would be, as he pointed out, punished.

He says he promised to the people that he would not respond to those who insult and slander him.

"I will not talk about it for another 15 or 20 days until this crisis is gone," Vucic said.

Vucic adds that in some countries violence in times of emergency has tripled, but that is not the case here.

"I will surprise you with a handful of data, and all that I will have to say, but I will not talk about this when the country is threatened," he said, adding that he would not jeopardize such a vital thing as fighting coronavirus with daily politics.