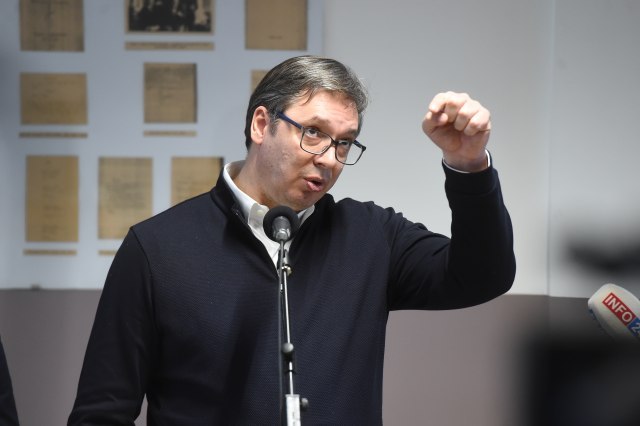 "Kurti decided the day before my trip to Washington to suspend tariffs on Serbian goods", Vucic commented, perceiving such a move as an attempted hoax.

"Have you thought of that on your own or someone helped you?", he asked Kurti, adding that the special envoy for the Belgrade-Pristina dialogue is right and that this is just a game.

He told reporters in the central town of Gornji Milanovac that no one form Serbia's authorities reacted to Kurti's announcement on partial abolishment of fees, because they wanted to correctly assess what he actually said. Kosovo's Prime Minister Albin Kurti announced last night that he would begin suspending tariffs on products imported from Serbia and Bosnia and Herzegovina starting from March 15, and that he would first abolish taxes on raw materials, but on condition that Serbia pledges to stop the derecognition campaign of Kosovo's independence.

U.S. Special Envoy for Belgrade-Pristina Dialogue Richard Grenell said Kurti made a mistake and that Washington did not support half measure regarding the taxes. "Our position is quite clear: the tariffs must be completely dropped. Mr Kurti is making a serious mistake - and that was made clear to President (Hashim) Thaci at the White House today", Grenell wrote on Twitter.

"US Envoy Grenell is right, this is an attempted hoax. If that's okay with the EU, I have no problem with it. They can do what they want, but I've learned the lesson long time ago", Vucic said.

He said that Kurti deliberately said that a day before Vucic's trip to Washington to prevent him from discussing the issue, while the start of the implementation was planned to coincide with his (Vucic's) visit to Berlin.

"He decided to lift taxes on raw material, seriously… To suspend tariffs on wheat from Serbia because 20 euros per ton is cheaper than the one from North Macedonia, because that's what the businessmen from Kosovo demand. On the other hand, they are not interested in Serbia's final products where we could make a profit. Has he thought about that on his own or someone helped him? We will wait for them to lift the tariffs and then talk. Until then – we will be patient", Vucic concluded.