"Kurti doesn't understand history, the idea is to abolish all borders"

"Kurti doesn't understand history, the idea is to abolish all borders" 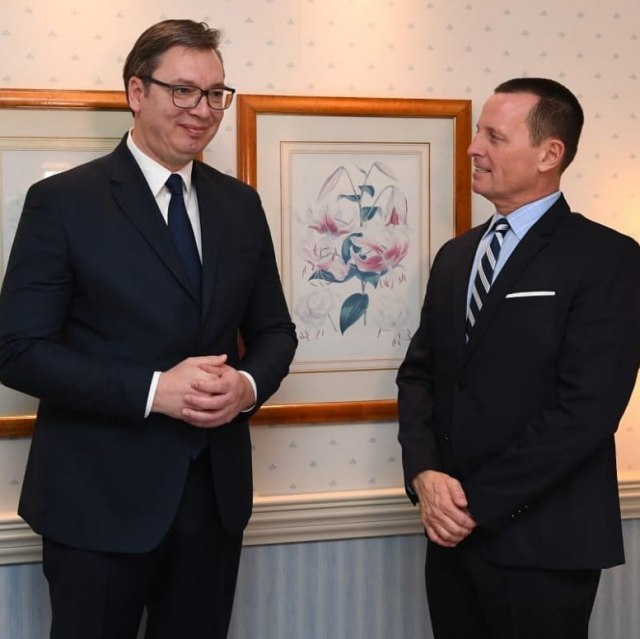 Following a meeting this afternoon, immediately upon his arrival in Munich, with Special Envoy of the U.S. President for the Belgrade-Pristina Dialogue, Richard Grenell, Vucic answered the questions on a press conference.

"Washington wants the Kosovo authorities to revoke the 100 percent tariffs on goods from Serbia, and they insist on its immediate and urgent suspension, so that Belgrade and Pristina can resume dialogue", Vucic said.

He said that people in Serbia know, and he will not repeat, that "there are no easy talks for us", but he is also very pleased because Grenell has taken a firm approach in abolishing fees.

When it comes to negotiations with Pristina, he said it all depends on the abolition of fees.

"We sat with them in various venues, but formal negotiations depend on the abolition of taxes", Vucic said, adding that it had nothing to do with the election campaign.

"My idea is that when you go to Bosnia-Herzegovina, Montenegro, North Macedonia and Albania, you have no borders, but that requires political stability," Vucic says, adding that he is concerned about the situation in Bosnia and Herzegovina where the crisis broke out because of the Constitutional decision court that land in Republika Srpska belongs to Bosnia and Herzegovina.

Vucic told reporters that in his conversation with Grenell, he also expressed his belief that we would "all have the strength together to preserve peace and stability".

"I spoke with Milorad Dodik on the phone, he conveyed his position to me and I saw that everything that had happened hit him hard. We agreed to discuss this in more detail on Saturday", Vucic said in Munich, where he will participate in the Security Conference tomorrow.

He said that in his conversation with Dodik, regarding the situation in Bosnia-Herzegovina, he sensed worry and concern, but also shared that concern with Dodik.

He hopes that we will have enough strength to understand Bosniaks and everyone else, given that peace is a priority interest of all of us.

"Anyone who thinks otherwise, counting people, heads, potential weapons, makes a terrible mistake. We don't need that. I hope we can avoid bad scenarios, and at the same time be able to strengthen the economy further", Vucic said.

"Imali smo otvoren i iskren razgovor koji za nas nikada nije lak, ali zadovoljan sam što je Ričard Grenel ovako čvrsto za ukidanje taksi. Za nas nema lakih razgovora, to ljudi razumeju, a pritom moramo da sačuvamo mir i stabilnost i da obezbedimo ekonomski napredak uz očuvanje vitalnih nacionalnih interesa. Grenel neskriveno i vrlo snažno govori o neophodnosti ukidanja taksi. Kada se ukinu takse mi smo spremni da sednemo za sto. Sutra je jedan od najnapornijih i najvažnijih dana, čeka me 16 sati sastanaka i dva važna panela, jedan sa nemačkim investitorima koji je od izuzetnog značaja za nas. To je velika čast i prilika da predstavimo Srbiju. Hoćemo da dovedemo investitore u Srbiju, da otvorimo granice, da budemo slobodni u svakom smislu i ekonomski snažniji." - Predsednik Vučić nakon sastanka sa @richardgrenell specijalnim izaslanikom predsednika @realdonaldtrump za dijalog Beograda i Prištine. . . . “We had a difficult, but open and honest conversation with U.S. Special Envoy Richard Grenell, and I am pleased to hear his support for dropping the tariffs. These are not easy talks for us, and our people do understand that, but we are committed to maintaining peace and stability, ensuring economic progress and preserving our national interests. When taxes are abolished, we will be ready to sit down at the table. Tomorrow will be one of the busiest and most important days for me. Through 16 hours of meetings and two important panels, including one with German investors, I will have the great honour and an important opportunity of representing Serbia in Munich. We remain focused on bringing investors to Serbia, opening up our borders and strengthening our economy further.” - President Vučić after meeting with @richardgrenell U.S. Special Envoy of President @realdonaldtrump on the dialogue between Belgrade and Priština.

He rejected claims by Kosovo Prime Minister Albin Kurti that the Serbian authorities want to create a fourth Yugoslavia, saying that all he wants is to secure higher living standards for everyone who joins the mini-Schengen initiative, adding that ""Mr. Kurti knows neither the history of his own people, nor the history of the region".

“My only goal is to secure the free flow of goods, people and capital and stronger economies for the region, both for the Serbs and Albanians, but unfortunately they don’t understand that in Pristina,” Vucic said, adding that they have conspiracy theories instead.

The Prime Minister of the Interim Kosovo Institutions, Albin Kurti, said that "mini Schengen" was Serbia's intention to form a fourth Yugoslavia and considered such an idea a danger.