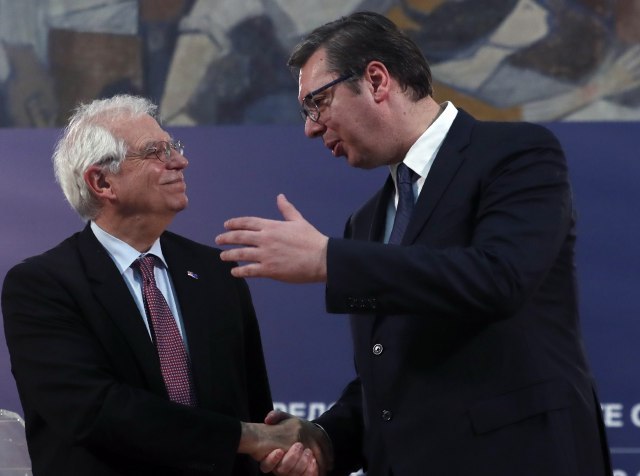 Vucic added that in spite of this, he will not give up the fight for that solution and he is willing to participate in the process.

After talking with EU Foreign Policy Chief Josep Borrell, Vucic recalled that he discussed with him the missed chances and what could be done, including the proposals to reach a compromise solution.

"There is no one who at the time did not utter the worst abominations about me and Serbia, and even the Albanians. It is as if this question does not concern us and the Albanians, and only concerns us. But we were the only party that was not allowed to decide about anything. They all lectured us on the opening of Pandora's box and about implementing a different solution. When I ask them why they opened this box with the recognition of Kosovo's independence in 2008, and the 1999 bombing, I did not get an answer. There is no answer and there will be none", he said.

Vucic said that Serbs must get used to the fact that other nations regard them as losers and someone who has to pay a high price for the 1990s, in order to become part of the civilized world.

"What we can accept in the end - it is up to us to decide, but it is in our interest to accept the compromise", Vucic said.

He reiterated that Serbia had done with wars because it had too many casualties in the wars in the 20th century and that it is of utmost interest to preserve peace.

"That is bottom line. Economic progress cannot be achieved without peace and stability. We exceeded Bosnia-Herzegovina in salary growth and managed to catch up with Montenegro, although we were € 150 behind. But that does not mean we should accept humiliation", he said.