BELGRADE -- After presenting the 'Serbia 2025' Program, Serbian President Aleksandar Vucic spoke about political developments in the country and the region

BELGRADE -- After presenting the 'Serbia 2025' Program, Serbian President Aleksandar Vucic spoke about political developments in the country and the region 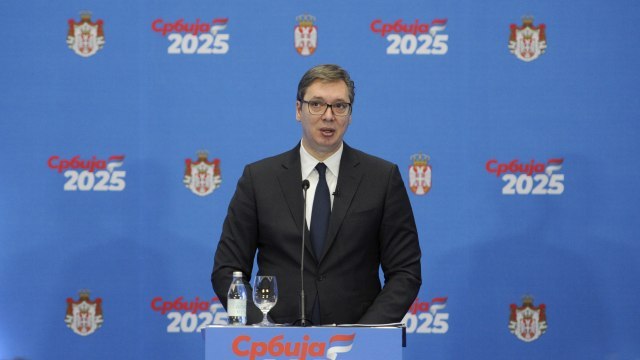 "Main condition for fulfilling this is to preserve peace and stability in the region," President Vucic said.

"A few days ago, we were attacked by some politicians from Bosnia-Herzegovina for the National Defense Strategy. Yesterday, Dodik attacked us and said, 'Why are you mentioning Bosnia and Herzegovina?' We just respect the Dayton Agreement", President explained.

Vucic also referred to developments in Kosovo and Albania.

"There are so many false lies and fabrications in Albania about me, and I am silent and waiting for them to do something, to form a government so we can talk", Vucic said.

"So it will take a lot of effort, energy, to be able to maintain peace," he stressed.

When it comes to incidents that happened in Bosnia-Herzegovina, Montenegro and Serbia, President does not see the similarity of the situations.

"I don't believe in a conspiracy theory so I don't see the resemblance in those events", Vucic said.

"There was an inter-party conflict in the Republic of Srpska, in Montenegro the only very serious reason for political turmoil stands in the fact that it is major issue. In Serbia, you had an incident because some are boycotting the work of the Assembly even though they are receiving a salary", Serbian President said.

"Those who caused the incident in the Serbian Parliament wanted to send an ugly picture from Serbia to the world, and did this help the Serbs in Montenegro? On the contrary. What was the reason for this and what else is there for them to do? The biggest mistake was made by the SNS representatives, who allowed a small fascist group to become visible", Vucic added.

Asked how all those plans and achieved results will affect European Union officials, Vucic says he is not in charge.

"Serbia is a candidate country, we are not an EU member. Ask Sem Fabrizi, EU Ambassador to Serbia, how to set up the EU", Serbia's President said.

"As far as Serbia is concerned, we will do our job. When the fees are abolished, we will be ready to talk. And we achieved these results despite the fees", Vucic was clear.

You can find in the enclosed video what the President said after the presentation of 'Serbia 2025' program for TV Prva.