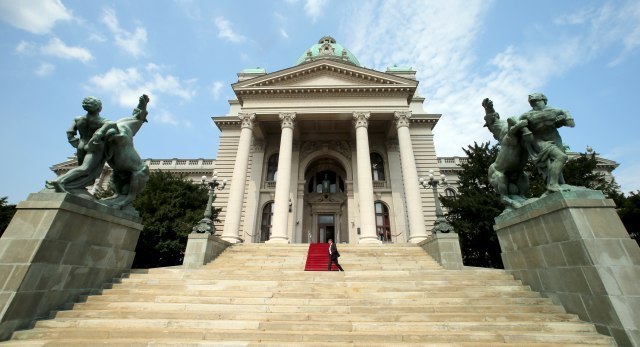 Accompanied by MP Ivan Kostic, Obradovic entered the hall during the session, with a large banner against the Montenegrin authorities, and stood by the speaker's stand, causing disturbance that followed. Then, the President of the Serbian Assembly Maja Gojkovic adjourned the session and called on the MPs and security for peace and to remain calm.

Obradovic walked into the auditorium with a banner that said, "Milo, you thief, we don't give you shrines" and started talking from a stand, but you couldn't hear what he was saying in the live broadast because the microphone was switched off.

Members of the ruling majority, Vladimir Marinkovic, Aleksandar Martinovic and Minister Aleksandar Vulin, responded to it and approached Obradovic and Kostic.

Assembly security appeared in the hall, but Gojkovic urged them not to react, and advised MPs to avoid provocations, to be restrained, so the peace could be restored.

Majority MPs returned to the benches, and Obradovic and his MPs walked out of the hall.

In the lobby, Obradovic addressed reporters and said that it was a "political performance", common in world parliamentary practice, with the aim of expressing dissatisfaction with both Podgorica's decisions and its "lukewarm" reaction to those decisions in Belgrade.

After ten minutes, the session continued with a discussion of amendments to the Law on the Serbian Armed Forces.