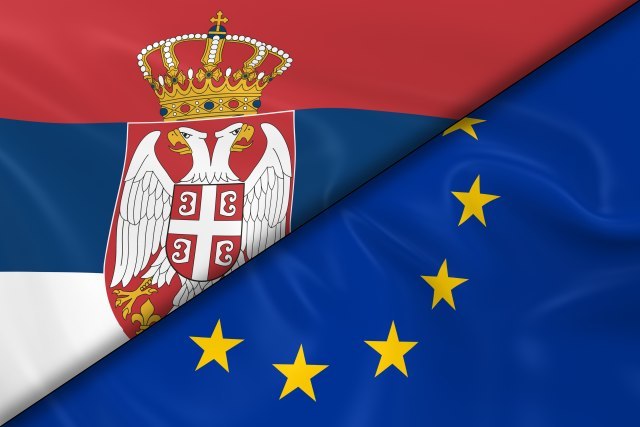 Head of the Delegation of the European Union to Serbia Sem Fabrizi delivered today to Prime Minister Ana Brnabic the Annual Report of the European Commission on the Republic of Serbia.

At a press conference held in the Serbian government, Brnabic assessed that the Report is basically positive because it recognises the progress in some areas, primarily in the economy, but expressed the expectation that in the future there will be no political assessment of progress towards the EU in some important areas.

She voiced hope that the estimates of Serbia's progress will be based on facts, rather than on the political views of some parties.

We will continue to implement the recommendations of the European Commission and pay attention to the essence, not the form, Brnabic said, and criticised the EU for using double standards on the issue of Kosovo-Metohija.

She said she is worried about the situation in Kosovo-Metohija and the constant and increasingly frequent incidents.

I am concerned about the lack of a concrete response from the EU to everything that is happening. First of all, today is 2,226 days since the signing of the Brussels Agreement and the obligation to form the Community of Serb Municipalities. Brussels is the guarantor of this agreement, and the EU has guaranteed its implementation, the Prime Minister explained.

She said that the Report on the progress states that Pristina "has yet to engage in the establishment of the Community of Serb Municipalities" and underlined that this shows double standards.

I am also concerned about the lack of reaction to the incidents that happened yesterday, and to the fact that since 6 November Pristina does not only violate the CEFTA agreement, but also clearly violates the SAA. Brussels has mechanisms to initiate a procedure for violating the SAA. But apart from verbal condemnation, they have not launched these mechanisms, she underlined.

If the EU wants the rule of law so much and insists on it so much, then they should insist on the rule of law in their own actions. They should guarantee the application of the Brussels Agreement and the establishment of the Community of Serb Municipalities and they should respect the SAA agreement. This agreement stipulates mechanisms for cases when the agreement is violated and they should apply them, Brnabic said and underlined that Serbia is continuing its European path.

Fabrizi said that the Report noted progress in some areas, but that Serbia must be more determined and step up its efforts in some major areas, such as the strengthening of democratic institutions and the rule of law.

He said that areas in which reforms should be strengthened are the judiciary and the fight against corruption and crime and the realisation of basic rights.

He highlighted the importance of strengthening democratic institutions such as parliament, in order to ensure inter-party dialogue and the supervisory function of parliament over the executive power.