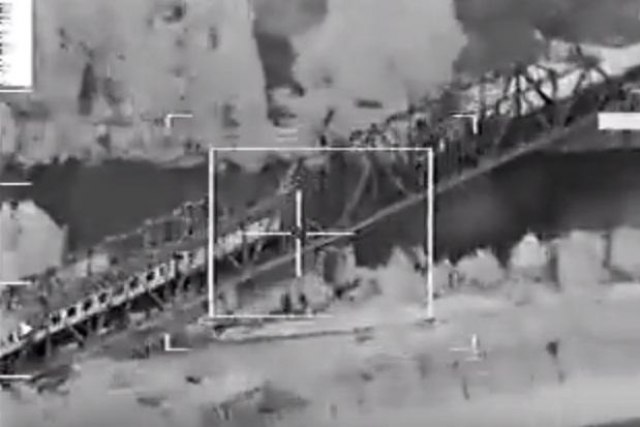 A NATO warplane targetting a train on a bridge in Serbia during the 1999 attack (screenshot, file)

The commission's president, Darko Laketic, told reporters at the Serbian National Assembly that this study focused only children, because they are less exposed to other risk factors such as smoking.

The research was conducted in cooperation with the Institute of Public Health named after Dr. Milan Jovanovic Batut, and showed that the most common tumors in children aged up to four years are neuroectodermals, while those five to nine years of age most often suffer from blood tumors.

Leading tumors in children aged 10-14 and 15-18 are brain and solid tumors, respectively.

"This research unambiguously shows that several generations in a certain sensitive period have been exposed to some factor that made them more susceptible to falling ill with certain malignant diseases, compared to other generations of the same age," Laketic said.

Laketic added that Serbia has the funds to investigate the consequences of the NATO bombing, as well as the experts, but that he was not certain the country has sufficiently sophisticated equipment - "and will have to either purchase it or rely on foreign partners who have that equipment."

"I have Italians in mind, who handed over the entire documentation of their commission and offered help with biochemical or toxicological analyses," Laketic said.

He assessed that the bombing, that started on March 24, 1999, and lasted the following 78 days, had left unprecedented consequences on Serbia, which he said was a "country-victim." It is also a country that must, not only for its own, but also for civilizational reasons, preserve the truth "as a warning and a lesson to itself and to others."

"I'm not sure there is a common national awareness of the suffering of Serbia in the NATO aggression of 1999, but such a tragedy in all of Serbian history cannot and must not be forgotten, or be downplayed or adapted to the needs and interests of large or small powers," he said.

The commission headed by Laketic was set up last year.