Dialogue round on Sunday will be "difficult," says Vucic

Aleksandar Vucic says the dialogue with Pristina on Sunday will be "difficult" - but that Belgrade will "defend its position."

Dialogue round on Sunday will be "difficult," says Vucic

Aleksandar Vucic says the dialogue with Pristina on Sunday will be "difficult" - but that Belgrade will "defend its position." 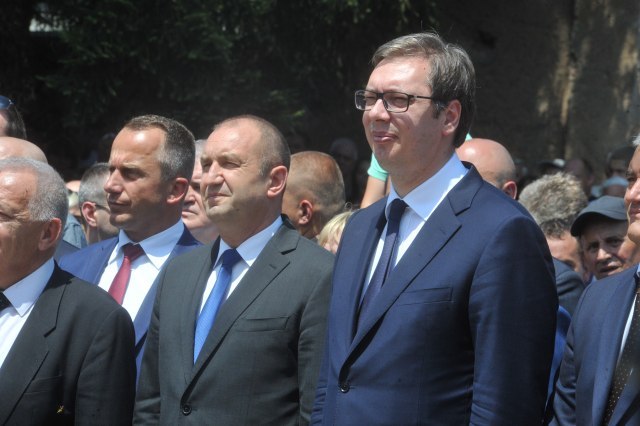 Vucic, who spoke in Dimitrovgrad, eastern Serbia on Friday - where he visited together with Bulgarian President Rumen Radev - was asked by journalists whether Serbia will solve the passport issue that is preventing Serbs in Kosovo and Metohija from traveling without visas (to the Schengen area).

He replied that the problem "exists" - but that Brussels "halted (a solution) on several occasions."

"I hope we will find a solution. Most people have solved this by registering in another place. We are looking at ways of finding technical solutions to this question," he explained.

When reporters remarked that "more and more young Serbs are leaving Kosovo and Metohija," Vucic said that Serbia is doing what it can, among other things, by bringing investors, but that it is difficult because there is no safe legal framework in Kosovo.

"We set aside more than 500 million euros a year for our population in Kosovo and Metohija. We know that they appreciate it and know it," he said. Vucic then pointed out that the state is working to keep the Serb population in Kosovo also through projects such as the Sun Valley settlement.

"However, young people are not leaving only Kosovo, but also Belgrade, and other parts of Serbia. That is why it is important to, when it comes to the standard of living, catch up with others as soon as possible," Vucic stressed.