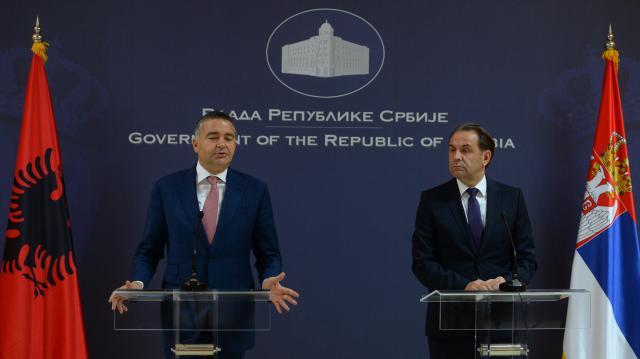 At a joint press conference with Klosi, Ljajic, who is one of the deputy PMs in the Serbian cabinet, emphasized that Serbia and Albania have the potential to develop cooperation in the field of tourism, as well as to create a common tourist product in order to attract, first of all, guests from overseas markets.

He said that Serbia is interested in increasing the tourism turnover between Serbia and Albania, which until now has been insignificant, given that only 3,000 to 5,000 of our people travel to Albania, whereas our country does not even register Albanian tourists in Serbia due to their small number.

We believe that we have a lot to offer and that the exchange of tourist experts, the cooperation of our travel agencies, chambers of commerce and the arrival of the media from the two countries and their reporting will contribute to the growth of tourism traffic in both directions, Ljajic said.

The agreement with Albania is, he noted, one in a series that Serbia has with almost all countries of the region, except with Croatia and Bulgaria that should be signed soon.

According to Ljajic, these agreements are of great importance because they lead to the creation of a common tourist product, which increases the chance to attract tourists from remote markets.

If the countries of the region act independently and individually, these chances are significantly lower considering the trends of tourists, especially from distant markets, to visit two or more countries during one tourist trip, Ljajic explained.

He estimated that nothing connects peoples, states and our societies better than tourism, and that nothing can destroy better and more effectively stereotypes and barriers among people as tourist trips and the experiences that these people have when visiting a country.

The Deputy Prime Minister noted that Serbia, together with Albania and Montenegro, tried to jointly present itself on the Japanese market, and after that, Macedonia and Bosnia-Herzegovina were also included in that project that is called "The Balkans - Your Next Destination."

Klosi underlined that tourism is becoming an increasingly important part of the economy of the two countries because it brings money, and money provides economic power and prosperity for all.

Albania and Serbia have great chances and much to offer together. The potentials are great and should be used, including cultural heritage and the promotion of our lifestyle, the minister said.

He said that after the signing of this agreement, there should be great support for all institutions involved in the tourism sector.

Thus we could achieve far greater results on the world market, the Minister of Tourism and Environmental Protection of Albania concluded.