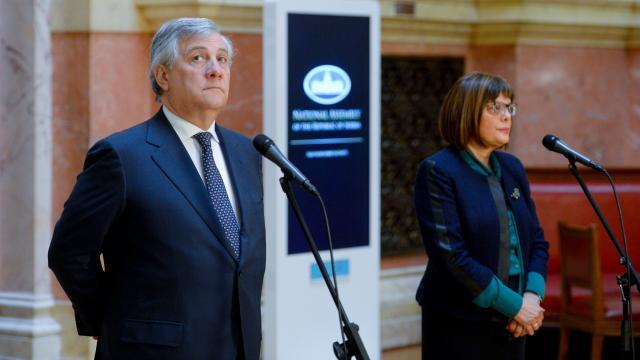 As he said, it is important that a large country like Serbia has a parliament that is "a protagonist in these developments" - while parliamentary diplomacy between the EU and Serbia is "important."

"I think we are on the right track," Tajani said, adding that Serbia is "a large European country in terms of culture, tradition and identity," which, he added, facilitates it moving closer (to the EU), something he " hopes will occur as soon as possible."

The EP president emphasized that in the current situation in the Balkans the role of Belgrade is "extremely important" - "because a stable Balkans means a stable EU."

He explained that the six-month presidency of Bulgaria is an opportunity for the EU to further improve relations "with important Balkan countries."

"We have a problem with foreign fighters, terrorism and illegal migration," Tajani said, adding that special attention should be paid to these global topics.

Tajani also said that the EU sees Serbia as important in terms of economic cooperation and added he hoped that "European companies will help Serbia reduce unemployment, especially among young people, and thus strengthen good ties with the EU."

Tajani said he and Gojkovic also talked about Kosovo, and noted it was "important for the EU to see a progressive reduction of tensions and continuation of cooperation." He also announced that EU's Donald Tusk and Jean-Claude Juncker would soon be visiting Serbia.

Gojkovic said after the meeting that Tajani's visit was "of great importance to Serbia, the region, the countries that are in the process of EU accession, but also for the EU itself."

Tajani, as she said, highlighted the importance of Serbia as an important factor and key to stability in the region, both in political and economic terms.

Gojkovic said that the topics today included the role of the Assembly in the process of European integration, the importance of controlling the executive branch of government, strengthening the capacities of the parliament, and the issue of Kosovo and Metohija.

"Serbia and Belgrade expect the Pristina authorities to be committed to the Brussels agreement, as Serbia is, and our priority in this dialogue is to form the Community of Serb Municipalities," concluded Gojkovic.