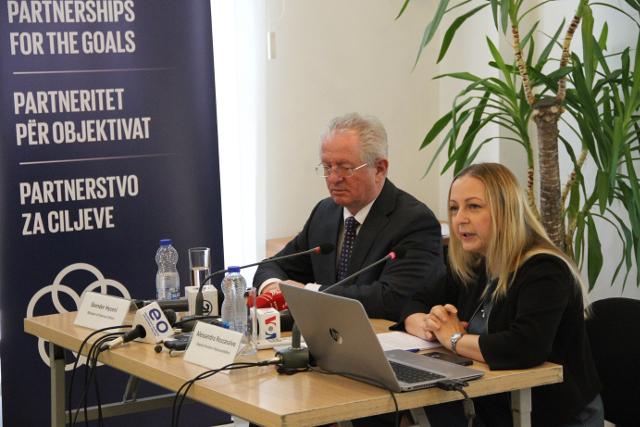 The survey was carried out in all 38 municipalities in Kosovo, with the report was presented by Deputy UNDP Permanent Representative Allesandra Rocasalvo.

"I would like to say that Kosovo, for its current circumstances, has displayed spectacular results in preventing violent extremism," said Kosovo Interior Minister Skender Hyseni.

He noted the police was prepared to work more intensively on these issues, and that while "a lot has been done, but further efforts are still needed in the fight against extremism."

According to the report, citing police data, 316 citizens from Kosovo have joined Islamic State, Al-Nusra, and Ahrar al-Sham - among them two suicide bombers, 44 women, and 28 children.

The report's key findings are that 43.8 percent of respondents believe radicalization is chiefly driven by economic incentives, while 42.9 percent also mentioned social isolation as an indicator of radicalization and becoming radicalized, 44.4 listed aggression, and a further 44.4 percent "engaging with extremist content on social media."

59.7 percent "look to outward signs in changes of appearance as indicators of radicalization."

Women were "consistently more likely to report that radicalization is occurring in their communities," the survey has shown.

34.7 percent of respondents reported witnessing educational leaders liking and sharing extremist pages or media on social media, while "almost half believe that the media has a role to play in radicalization - 48.9 percent cumulatively, compared to 23.7 percent who said no."

"The vast majority of respondents see the family as the most important social structure to help in the prevention of radicalization. 67.4 percent said they would be willing to use an anonymous hotline to report instances of radicalization," according to the survey's key findings.

An estimated 10-15 percent of Islamic State's foreign recruits are women, the report noted, and added:

"This ratio is consistent for Kosovo, with 14 percent of foreign recruits being women (including both voluntary and coerced). Two distinct groups
are evident: young women (as young as 15) who travel to ISIS territory to marry an ISIS fighter and women who are already married and travel with their husbands."