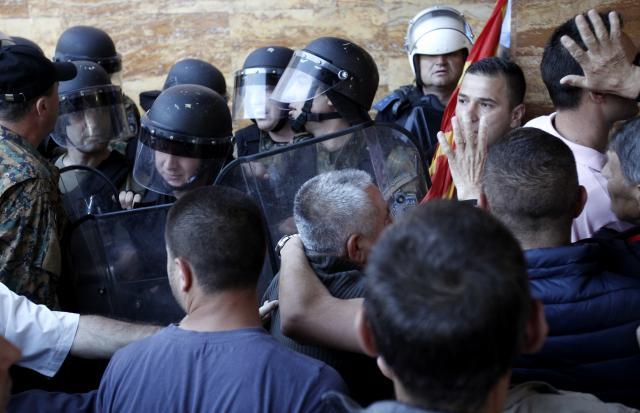 Citizens remained gathered in front of the building, but the situation was calm late last night. About 50,000 people were there, who expected to be joined by others from several Macedonian cities during the night.

Citizens who have been protesting for months against the possibility of Zoran Zaev's SDSM forming a government with several Albanian parties, spent last night in tents in front of the Assembly.

They oppose the election of Talat Xheferi from the Albanian party DUI as president of the Assembly, and think this was done contrary to the Constitution and the law.

A proclamation forwarded to all media and foreign embassies in Skopje said that "the people showed they were defending democracy in Macedonia" and said they intended "to go all the way."

Doctors at the St. Naum of Ohrid hospital told reporters that 45 people were injured, including three police officers and security guards.

Beta is reporting that among them are Zoran Zaev and several members of his party, as well as Ziadin Sela, leader of its partner party the Alliance for Albanians, who, according to the local media, suffered the most serious injuries.

Over 100 demonstrators, supporters of VMRO-DPMNE, stormed the plenary session of parliament, while others entered the press room where Zaev and the Albanian parties and journalists were stationed.

The protesters stormed the building after Xheferi's election by 67 votes against 61. Beta said that MPs of VMRO-DPMNE, the party that has the most members of parliament individually, led by Nikola Gruevski, shouted "This is a coup!" and sang the Macedonian national anthem.

President of the Democratic Party of Serbs in Macedonia Ivan Stoilkovic agreed that the events in parliament earlier were "a coup attempt," and said the situation "escalated" because the Albanian anthem was also sung in parliament. Stoilkovic said that Serbs in Macedonia want to see the Tirana Platform fail, because it is "a step toward creating a 'Greater Albania'."

Because of the situation in Macedonia, Serbian Prime Minister Aleksandar Vucic scheduled an emergency session of the Coordination Bureau for Security Services for Friday in Belgrade.