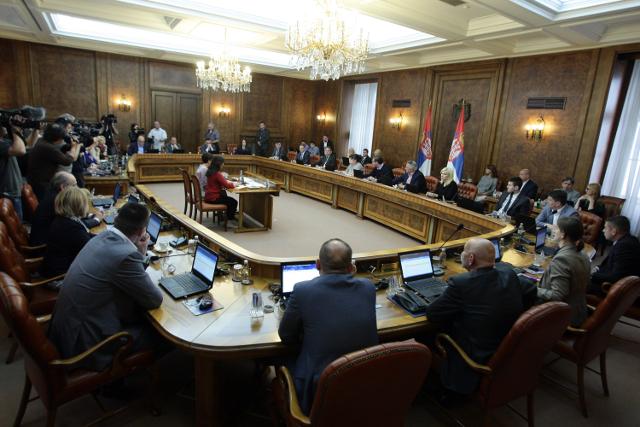 Vucic also said that Serbia would send France a protest note "in the strongest terms."

Addressing a news conference after the government meeting, attended also by Justice Minister Nela Kuburovic and Office for Kosovo and Metohija Director Marko Djuric, Vucic said that "if the French court's decision wasn't unlawful, scandalous, and sad - it would be funny."

According to him, Serbia's legal team is analyzing the ruling, which he described as political - "and future steps will soon be known."

Vucic stressed that Serbia had sent complete extradition documentation to France, and that "the key was the fourth point of the court's decision which states that extradition would have grave consequences for Haradinaj."

"We didn't invite him over for chocolate and candy. We want him for war crimes," Vucic said.

The legal team has started analyzing the case and has many questions "that we know in advance will never be answered," he said, and reminded of the testimonies of the victims.

Vucic also revealed that he was "sorry" because Albanian Prime Minister Edi Rama said this was "a victory of Albanians".

"Serbia will, beside these measures, continue to prosecute all those who have committed war crimes, and we will continue to behave in line with that. I only wish to tell people in Serbia that they can walk the streets with their heads held high. We have not been defeated and humiliated - that happened to those who made such a decision," Vucic said.

"To us, a person who commits a crime is a criminal, to them, a crime is not a crime if it is committed against those they fought against militarily or politically," he added.

"Various threats" have been heard in recent days, Vucic said.

"And what's the price we can pay - well nothing," he said.

"Therefore I am calling on all citizens to walk with their heads held high. We are a small country in Europe fighting for law and justice, ready to stand up to the most powerful powers; it's good that they have shown what they think about our people," Vucic added, and concluded:

"They lecture us on how the rule of law should function. Do not be showing us how any longer."

Serbia has no right to appeal against the French court's decision, announced on Thursday morning.

Haradinaj, an Albanian politician from Kosovo and a former leader of the KLA ("Kosovo Liberation Army") said the ruling was "a victory of Albanians", while his lawyer said the court found that he "would not have a fair and just trial" in Serbia.

Belgrade-based Prva TV is reporting that the court originally ruled to extradite Haradinaj, but then reversed this decision.