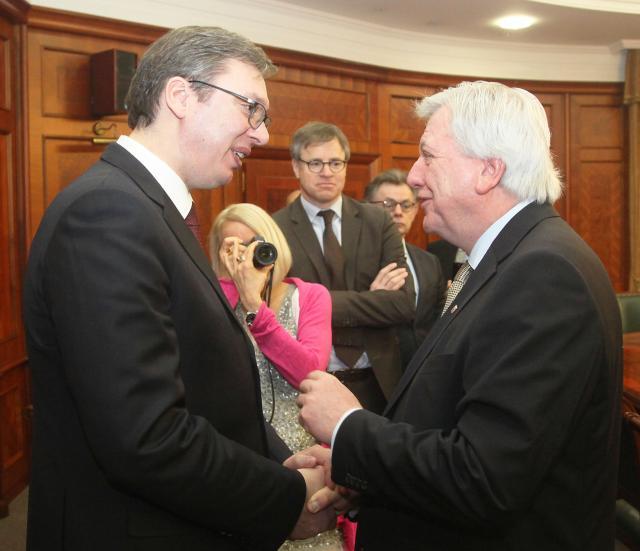 Asked about the situation in the region, Vucic, who spoke in Belgrade on Tuesday during at a joint press conference with Volker Bouffier, minister-president of the German state of Hesse, said that Serbia follows the developments in Macedonia and is not interfering in the internal affairs of that country - something he said was "a correct and fair attitude towards our neighbors."

"We've always had good relations between Belgrade and Skopje, I believe that we will be able to maintain them, but we will not allow anyone to humiliate Serbia," Vucic said.

When it comes to Bosnia-Herzegovina, Vucic said that this was a difficult issue for Serbia and one that he and Bouffier spent the most time today discussing it.

"The only thing I promised to him and to citizens of Serbia is that we will do our best to preserve peace and stability in the region, because it is a condition for progress and the arrival of foreign investors," said Vucic.

When it comes to Serbia's European path, Vucic said it was "up to Serbia to reform itself" while it was up to EU's member-states to decide whether they want such a Serbia in their ranks.

"We would like to join the EU. We believe that we belong to the European society, but the decision is up to the member-states," the prime minister said.

Bouffier said that the situation in the EU was difficult, while "the global policy is changing" which is why it is important that Europe is united - "something that is impossible without the stabilization of the Western Balkans, in which Serbia plays a central role."

He told a joint press conference with Vucic that the EU is "incomplete without the countries of the region."

"We're here primarily because Serbia is the key country in the region and because we want to encourage you, the government and citizens, to continue the reform process, and where we can help, we will. We're not here lecture but to provide concrete support for the purpose of a common future," said Bouffier.

He added that he arrived with a delegation from the province of Hesse, that includes the president of its assembly, as well as representatives of parties, "which shows how much interest there is in that part of Germany for Serbia."

Bouffier pointed out that the delegation was in Serbia "to further deepen relations."

"We follow with great interest the reforms being carried out and support that. Prime Minister Vucic pointed out that from his perspective development for a better future not only of Serbia but also all the countries in the region, is in the EU, with which we agree. The fact that yesterday two new chapters (in Serbia's EU accession negotiations) were opened shows that the reform achievements are recognized in the Union too," the German official said.