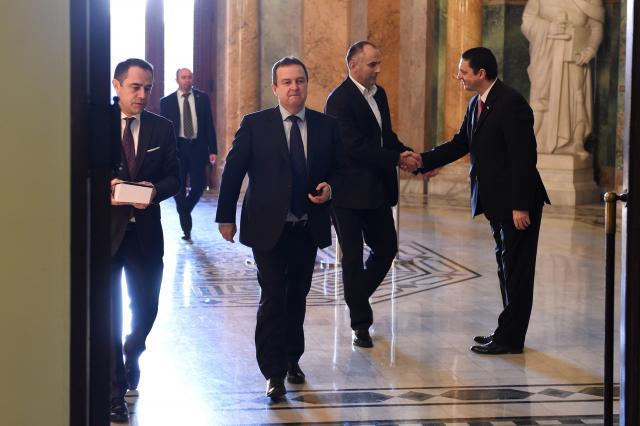 "Vucic is not just frowning, one can talk to him like a human being. When we were taking the oath in the Assembly, as new ministers, I told Vucic I would add to the text, 'may I not move from the spot'," Dacic said, when asked whether he expects parliamentary elections next year.

And although this is "his approach" to the subject, Dacic added that he is also "always ready for elections."

As for the regular presidential elections to be held in the spring, Dacic said his party is ready to discuss having a joint candidate of the ruling coalition if this initiative came from Vucic and the SNS, but noted that this has not been talked about so far.

Dacic added that the SPS is "always ready to have its own presidential candidate," and that since President Tomislav Nikolic is not a candidate at this time, he "can't see why he would state his position regarding Nikolic now."

Commenting on the media reports that the SPS was "flirting or having anything to do with Vuk Jeremic" in the context of his presidential bid, Dacic said this was "an absolute spoof."

According to him, Jeremic's concept is to take some votes from "the patriotic bloc" and some from "the DOS bloc." The latter reference is to the Democratic Opposition of Serbia (DOS), a former coalition of parties that took over in 2000 after Slobodan Milosevic and his party, the SPS, were removed from power.

"I think that's impossible. He (Jeremic) will certainly not take our share of the votes. I'm sure that a joint candidate of the ruling coalition, if there is one, will win in the first round. If there is no joint candidate, then the only thing left is for our (SPS) candidate to win," said Dacic.