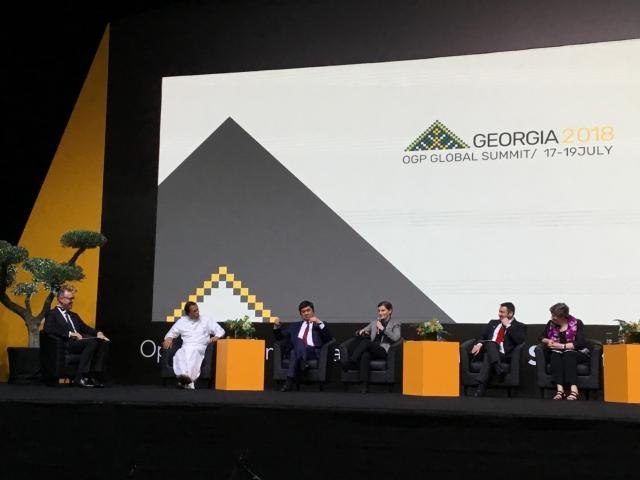 At the summit, opened by Prime Minister of Georgia Mamuk Bahtadze and attended by representatives from more than 90 countries of the world, the results achieved by introducing the concept of open administration, improving the electronic services for citizens, digitizing and reducing corruption were presented.

Brnabic spoke at the central panel attended by the president of Sri Lanka and the prime minister of Kyrgyzstan.

In the opening address at the start of the summit, Open Government Partnership Director Sanjay Pradhan praised Serbia and highlighted our country as an excellent example of work on data transparency.

At a time when most countries in the world are trying to make their data less available, Serbia is largely applying the concept of open data, Pradhan said.

Brnabic emphasized in her address that digitization is one of the key priorities of the government, primarily in the field of public administration, economy and education.

She said that Serbia has increased the number of services that citizens and businesses can receive electronically from state institutions and administrations in the previous year.

Citizens must be in the focus of public administration and have the best and most efficient services, the Prime Minister said.

"We are here because of the citizens, and not the other way around," said Brnabic, adding that she has been guided by that principle as a minister of public administration and local self-government.

She emphasized that the government is committed to building an open data system because it reduces corruption, increases competitiveness and transparency, and enhances trust between the state, citizens and the economy.

The electronic administration is the best mechanism for reducing corruption, the prime minister said.

The prime minister stressed the importance and necessity of good regulation in this area.

Speaking about concrete projects, Brnabic pointed out that among the greatest reliefs for citizens and the economy that Serbia introduced is the system of electronic exchange of documents between state institutions (eZUP).

Thanks to this system, citizens no longer have to spend money and time waiting in lines for various documents, said Brnabic, adding that in the first year, citizens have saved more than 500,000 hours of waiting time.

Brnabic said that Serbia has introduced the information system "eBeba", which enables the electronic application for registration in registries, residence, health insurance, as well as submitting a request for parental allowance already in the maternity ward, in only 15 minutes.

"Baby, welcome to the world" is an electronic service that not even much more developed countries in Europe have, the Prime Minister said.

She also pointed out that automatic health card certification was introduced, which employers no longer have to verify at counters, the eRecept service that enables automatic issuance of chronic patients' recipes for a period of six months, and launched an eSud platform that allows lawyers and citizens to take legal proceedings completely electronically.

Brnabic said that Serbia is rapidly turning into a modern country that wants citizens and businesses to provide transparent, easily accessible and efficient public services.

In particular, I would like to emphasize that we implement some open standards, in accordance with the prescribed EU standards, the Prime Minister emphasized.

Brnabic concluded that Serbia continues to work on improving e-commerce and raising public awareness of the benefits that such services provide.

The key to this process is the change of public administration, which must be in the service of citizens, the Prime Minister said.

An open public partnership represents the largest international initiative in the field of open governance, and Serbia has been participating since 2012.

Brnabic, as minister of Public Administration and Local Self-Government, participated in the Fourth Partnership Summit, held in Paris.

The core values promoted by the partnership are the fight against corruption and the strengthening of democratic institutions, public participation, freedom of information, fiscal transparency, efficient citizen services and digitization and data opening.