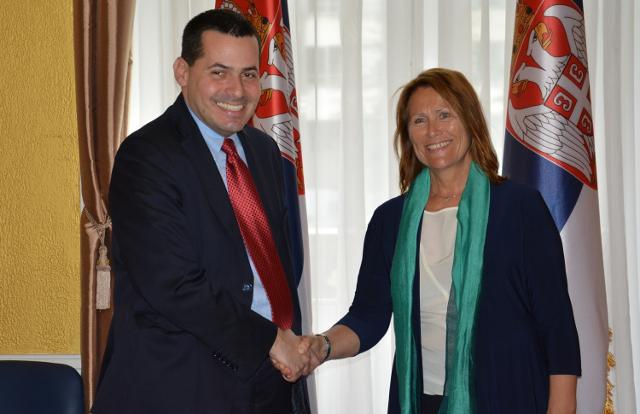 According to the Serbian government, Stevanovic and Faremo - who is under-secretary-general and executive director of the UN Office for Project Services (UNOPS) - spoke about "further improvement of cooperation with that office."

Faremo, who is on a three-day visit to Serbia, and her interlocutor "exchanged views on the current projects and activities of the UN Office for Project Services. "

The State Secretary praised the cooperation of UNOPS and the government of Serbia in the implementation of development and infrastructure projects.

He also expressed his appreciation for the assistance of that office in the reconstruction of vulnerable areas after the floods in 2014 and their overall engagement in Serbia.

Stevanovic also informed Faremo about the government's activities in the field of economy, infrastructure, further attracting foreign investments and strengthening the services sector, especially in the field of information technology.

Faremo expressed gratitude to the government of Serbia for its stated confidence, and at the same time highly assessed the cooperation with the relevant departments and partners at the local level in the implementation of significant development projects.

She confirmed UNOPS's readiness to continue supporting Serbia in the process of EU integration and achieving sustainable development goals in accordance with the UN Agenda on Sustainable Development by 2030, according to a statement from the Ministry of Foreign Affairs.

On Wednesday, Faremo was received by Deputy PM and Minister of Construction, Transport, and Infrastructure Zorana Mihajlovic.