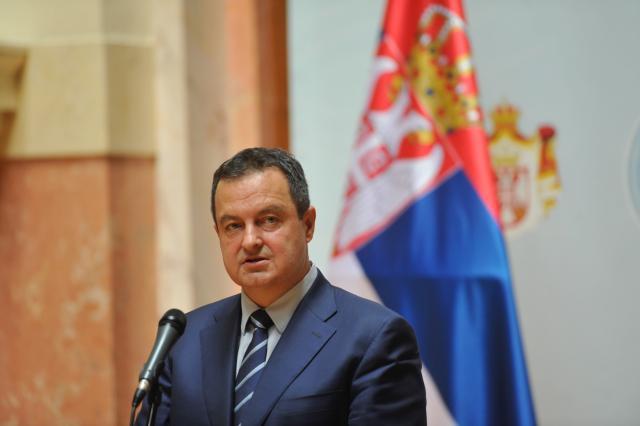 "Such a decision is disgraceful, incomprehensible, and humiliating for Serbia, it is the result of the intention to stop or slow down Serbia's European path," the foreign minister in Serbia's caretaker government said, and added:

"It represents open political pressure on Serbia to give up on the clear policy to protect its state interests."

According to Dacic, Serbia has fulfilled all the requirements set before it in the process of EU accession negotiations.

"Serbia is the key to regional stability and is making great efforts in reforms that will create a modern European country - so the EU should put an end to its tragicomical explanations about us being blocked by Croatia and Great Britain," Dacic said, and added:

"No, we are being blocked by the EU, because nobody can persuade me that the whole of the EU is not more influential than Croatia. Anyway, if Croatia - as a country that has committed genocide against Serbs in the Ustasha fascist NDH (Independent State of Croatia), and where the fascist salute still rings out - is to represent a yardstick for joining the EU, then the question of whether we are going in the right direction is being asked rightfully."

The minister added that EU's decision was "unacceptable to Serbia" and that he will suggest to PM-designate Aleksandar Vucic to hold urgent consultations on the country's further foreign policy moves, ahead of the July 4 Paris Summit.

Consensus was not reached on Thursday in Brussels to open chapters 23 and 24 in Serbia's EU accession negotiations.

Sources from the Council of the European Union confirmed this for Tanjug earlier in the day.

"There is still no agreement. This issue will now have to be dealt with by the Slovak presidency of the EU," an EU official told the agency.

Serbian minister without portfolio in charge of EU integration Jadranka Joksimovic is in Brussels this Thursday, and is expected to address the media later in the day.

Unofficially, the lack of consensus on the eve of today's meeting of COREPER (the Committee of Permanent Representatives in the European Union) was "not a surprise" to Serbia.

The Netherlands had hoped to open these chapters during its presidency of the EU, which ends on Thursday, but consensus of all member states has not been reached, a representative of the Dutch presidency told Serbian state broadcaster RTS.

EU ambassadors will, however, discuss chapters 23 and 24, as they meet today - but will only be able to conclude that due to Croatia's opposition, the intergovernmental conference where the chapters would have been opened will not be held today, despite earlier announcements.

Earlier in the week, it was reported that both Croatia and Britain were blocking Serbia - the former for "essential," and the latter for "technical" reasons.