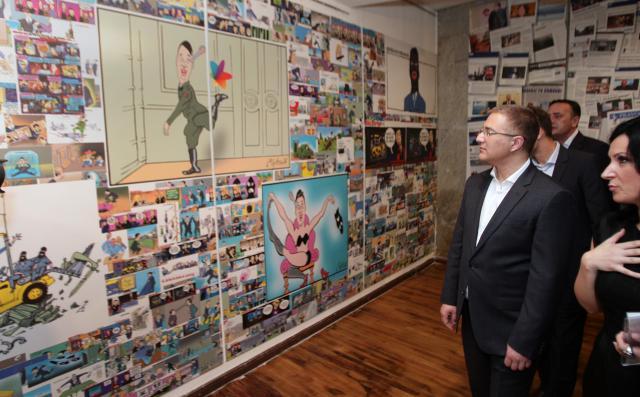 The Serb Progressive Party (SNS) is Serbia's ruling party, with its leader, Aleksandar Vucic, serving as the prime minister.

SNS press service head Vladanka Malovic said at the opening on Monday evening that the exhibition was not meant to "call out the media who write about Vucic insultingly," but provide proof that "not only criticism, but extreme criticism is allowed in Serbia, as well as absolute irresponsibility for what is written and said."

Malovic said that "only 2,523 examples out of a total of 6,732 pieces of negative media content published about Vucic and the SNS" have been curated and showcased.

As for the reasons the party decided to organize the exhibition, Malovic cited "talk of censorship coming from the domestic, but also a part of the international public."

She accused the media that "openly supported the Democrats (DS)" of launching "an organized, meticulously planned, brutal campaign against the government" in 2012, with Vucic as "the central target of the attack."

This "attack" then focused on censorship, "a term that the some media tied to the name of Aleksandar Vucic in a planned and tendentious manner," Malovic said.

According to her, the media's "main task" was to present Vucic at home and abroad as "a brutal censor who shuts down programs, brings down websites, sacks editors, bans articles."

Malovic added that the party "wants to present the truth, but solely based on the facts," and that the public "ought to see the examples that clearly show what journalism looked like in Serbia, from 2014 until 2016."

Political analyst Dejan Vuk Stankovic said the exhibition "may be the best way to finally bring up the question of the relationship between censorship and freedom in Serbia."

"The media scene in Serbia is precisely such that pluralism is visible with the naked eye," he said, adding that "even a cursory glance at the electronic, and in particular printed media and social networks testifies to the diversity that exists despite the continued attacks on the current authorities because of some kind of terrible censorship and dictatorship they are carrying out."

Stankovic believes that "a negative obsession with Vucic and the SNS" is behind it, and that there is a trend of either not mentioning or relativizing their successes, while "exaggerating their shortcomings or mistakes."

According to him, the last two years have seen "a hyper-production" of affairs, starting with "Helicopter" all the way to "Savamala."

"The exhibition testifies that there is neither censorship nor media dictatorship in Serbia, but instead there's even the right to abuse freedom. Freedom must always go hand in hand with responsibility, but a part of the Serbian media scene is not prone to that," said Stankovic.

The opening of the exhibition was attended by SNS officials, among them those featured in the negative media reports on display: Branislav Gasic, Nebojsa Stefanovic, Maja Gojkovic, Sinisa Mali, and Zoran Babic. They were joined by Aleksandar Antic from the Socialist Party (SPS).

The exhibition was criticized on Tuesday by two associations gathering journalists as "the pinnacle of cynicism that puts more pressure on the fragile freedom of expression."