NOVI SAD -- President Vučić, stated at the launch of the construction of the electric motor factory of Japanese Nidec Corporation that factory will be completed in a year.

NOVI SAD -- President Vučić, stated at the launch of the construction of the electric motor factory of Japanese Nidec Corporation that factory will be completed in a year. 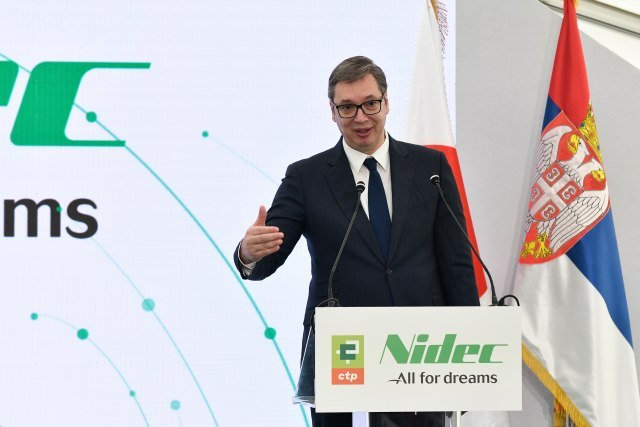 He pointed out that the arrival of Nidec was a fantastic success and that it was difficult to bring in such an investor.

The President points out that such companies bring the best and most innovative technology.

"This is the eighth factory we are opening in Novi Sad in seven years, which speaks volumes about how much Serbia has changed. These are no longer labor-intensive but capital-intensive factories and are fundamentally changing Serbia's position and strengthening our economy in the fastest possible way," Vucic said. Vučić said that when he talked to Shinzō Abe, the Japanese Prime Minister, told him that the arrival of Japanese companies brings not only the most modern technology, but also their high share in the country's GDP.

CEO of Nidec Corporation Jun Seki said that Nidec will first employ 260 workers, and then 500, and that they will gain new knowledge and new responsibilities.

When Nidec comes to Serbia, he says, it means that we have progressed and were able to treat that investment responsibly, that we have managed to show the kind of responsibility that was not inherent in us.

He said that this investment project was important for Serbia, pointing out that Nidec was making engines that he did not even know existed.

"Nidec is doing all that, and everything will be done through these few phases in Serbia," he underlined.

He said that CEO of Nidec Corp. Jun Seki said what the first phase will consist of, announced briefly the second phase, and then the third, fourth and fifth, which are all phases of the future for Serbia, which brings Vojvodina and Novi Sad great income in the future, to be able to invest more in roads and water supply network, environmental projects.

These, he adds, are things that are absolutely crucial for us.

"I am proud that after more than 40 years, there was someone who could host the Japanese prime minister. No one before me, since the establishment of the multi-party system, has had that opportunity," he said.

He said that he was proud that Serbia had established very good relations with Japan. He pointed out that there is no world leader with whom he did not talk, but that a responsible, disciplined approach to Shinzo Abe's behavior showed why Japan is so successful and why, although it managed to overcome all crises, catastrophes, it always wins and renews itself.

He thanked the company Nidec for always telling nice investors from other countries nice things about Serbia and for choosing this wonderful place for his investment.

Vučić expressed hope that Europe and the world will overcome current tensions and said that he was worried about the rise in the price of electricity out of all proportion, that it could no longer be purchased at a price lower than 300 euros per megawatt, and production cost 50 euros.

According to him, that shows how huge the lack of electricity and gas is, which affects everyone, including us.

"We are in a better position than others, but you can imagine when I am so worried about the situation what should say those who have a worse situation," said Vučić, emphasizing that he hopes that common sense will prevail.

The construction of the factory in Novi Sad is one of the biggest investments in our country. As previously announced, Nidec plans to bring an investment worth a total of two billion euros to Serbia, and production should start at the end of 2022. It was also announced that the factory for the needs of the automobile industry will employ 300 people in the first phase and that it will cover 26.000 square meters.

The goal is for the Nidec factory in Novi Sad to be the central base for the group's production activities in Eastern Europe and the company's headquarters, as well as for the companies in the Nidec Group, many of which are also planned to come to Serbia.

The investment is in line with the "Initiative for Cooperation with the Western Balkans", which the Japanese government is currently working on in relation to our country and other regions, and the Japanese company has received great support from both the Japanese and Serbian governments.

In Europe, the demand for highly efficient brushless DC motors and related products for home appliances is increasing due to stricter environmental regulations and stricter requirements for reducing carbon dioxide emissions for passenger cars in European countries. Also, it was previously announced that the Nidec company in Novi Sad plans to buy another 16 hectares of land by 2026 for further phases of the investment.

Nidec was founded in 1973 in the Japanese city of Kyoto, and today it is a world leader in the production of all types of electric motors with the largest share in the world market of small spindle motors that power hard drives. The corporation operates in more than 40 countries, with about 340 companies in the group and employs more than 120.000 people worldwide.

During 2019, the total sales revenue amounted to 11.8 billion euros. Investing in Serbia is part of the company's long-term strategy, and starting a factory in Novi Sad is the first step towards establishing the European Nidec Industrial Park.

The company stated that it will follow its decades-long experience in the new business venture, as well as the example of investing in the city of Pinghu in China, where Nidec has invested more than two billion euros in 20 years and built 12 factories with more than 12.000 employees. people.