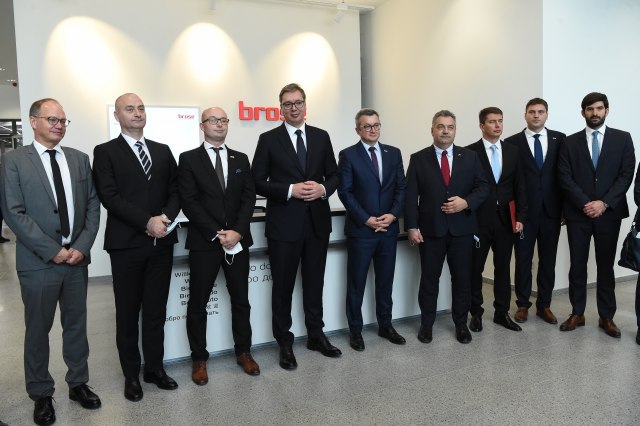 "This is probably the best factory ever. With the highest salaries, with 41 percent of people with a university degree. There will be 1.100 workers. 41 percent of engineers, most of them from Pancevo. Really amazing, a huge investment, 180 million euros," Vucic said.

"Not for 10, 20 percent, but more. People are working incredibly. It is a fantastic thing for Pancevo, for Banat, for the whole of Serbia. For now, let's not offend anyone, this is one of the best factories we have brought to Serbia", said Vucic.

As he says, Pancevo will only come to life.

"We now have to finish the fourth and fifth sectors, from Bubanj Potok, through Vinca, to Pancevo. Then we connected all highways to Zagreb, Subotica, Budapest, to Nis. This is very important for Pancevo. A completely different country. Pancevo is an amazing place, all prices will jump and rise due to the proximity of Belgrade. When the bypass is built, it will be a great place," the president pointed out.

Vučić, by the way, immediately after arriving in Brose, held a meeting with the company's management.

Construction of Brose's new plants began in March 2020, and since July this year, more than 350 employees have been producing electric fan motors for car refrigerators and electronics. The launch of the production line on which electric oil pumps will be made is planned for the beginning of 2022.

In early 2022, Brose will invest a total of 120 million euros in the first phase of the construction of the plant, which covers about 60.000 square meters. The expansion of production lines has already been announced, where a total of 1.100 employees should work by 2025, with a target turnover of the Serbian part of the company of around 440 million euros.

Brose decided on the location in Pancevo because it is a developed industrial city with a large number of qualified experts, and renowned universities in nearby Belgrade and Novi Sad with which the company wants to cooperate.

This fall, 20 students from Serbia will do an internship at the Brose factory in Pancevo, and some of them in Germany, the company announced.