What did you say, Angela?

BELGRADE -- Although she spent less than 24 hours in Belgrade, the messages sent by German Chancellor Angela Merkel during that time are yet to be analyzed, media report.

What did you say, Angela?

BELGRADE -- Although she spent less than 24 hours in Belgrade, the messages sent by German Chancellor Angela Merkel during that time are yet to be analyzed, media report. 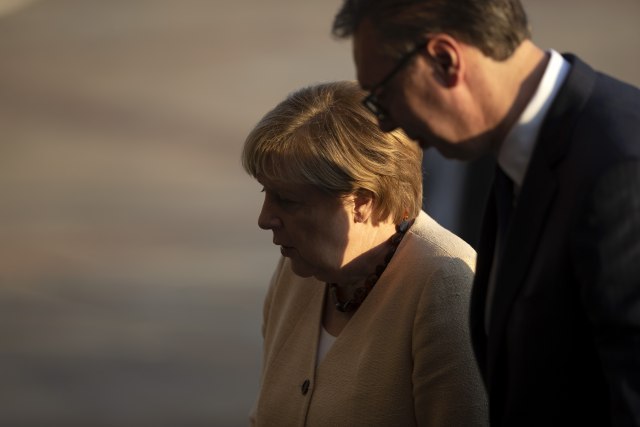 Some of them have already resonated, such as those about the rule of law, the solution of the Kosovo knot, the dangers lurking from "other parts of the world", and they also touched on the excavation of lithium, Blic writes.

The German Chancellor talked with the President of Serbia about various topics, from Serbia's European path, through its foreign policy, environmental protection and climate change, dual education...

Still, some issues stood out.

The rule of law and promise

Although she did not directly say what European officials often repeat: that there would be no progress towards the EU without the rule of law, Angela Merkel touched on this area.

"We talked about reforms, about opening new chapters in the accession process. It is important to make progress in the area of the legal system. The president presented his plans and made promises," Merkel said.

In a nutshell, Blic writes, there is a problem with the rule of law, and we expect it to improve, and that it will be so, guarantees were given by the President of Serbia, Aleksandar Vučić. Her message remains subject to interpretation, but the fact is that Merkel pointed out that she "knew Mr. Vučić as a person who no longer makes false promises, but as a person who tries to put into practice what he promises."

"I encourage further progress towards the rule of law, a plural society," Merkel said.

A solution for Kosovo and the EU accession

The inevitable topic was the old painful issue - the so-called Kosovo knot. How it will unravel is unknown for now, but the answer may be inferred from the chancellor's statement.

"Some issues will be resolved at the end of the process. Everyone knows that not all member states have recognized Kosovo's independence. The issue must be resolved in order for the current EU member states to answer in the affirmative on the issue of the EU accession process. It does not solve other problems", Merkel said.

To sum it up, there's much that can be resolved on Serbia's European path before the Kosovo issue really becomes to be or not to be. Then why wait with other challenges that are easier to solve? The message could also be understood in such a way that it may first be necessary to persuade the five members of the Union that have not recognized Kosovo's independence to do so, which would then make it easier for the Union to reach a final agreement.

However, Merkel is certainly right in one thing - when she says that "the issue will not disappear".

However, Vučić was more direct and made it clear what is more or less known to a part of the public - there is no EU membership without a solution for the so-called Kosovo. "We are certainly aware that we will not be a member of the European Union before that issue is resolved", said Vucic.

Danger from "other parts of the world"

German Chancellor confirmed the fear that the EU has when it comes to the relationship between the Western Balkans, and perhaps most of all Serbia, with other world powers, primarily Russia and China.

It is no secret that Serbia has often been criticized from the Union because of them, sometimes louder, and sometimes a little quieter, but that does not change the essence.

"Geostrategic interest is for the countries of the Western Balkans to join the EU. We have influences from other parts of the world, which is why we must keep in mind how important our geostrategic interest and the region's approach to the Union are," Merkel said.

Accidentally or intentionally, but it happened that the arrival of the President of the European Commission, Ursula von der Leyen, to Serbia and the signing of the contract on the construction of the highway Nis - Plocnik - Pristina were announced just yesterday.

The conversation with the lithium mine in Serbia has been heard far and wide, confirmed Merkel herself, who said that if any lithium excavations are realized in Serbia, "everything must be done in accordance with the highest standards, protecting the environment."

"If the whole world is interested in that, Germany is also interested," Merkel said. All in all, Germany also has an interest. Especially since, as Merkel herself stated, there is a large number of German investments in the automotive industry in Serbia, while lithium is important for future mobility and battery making.

"Serbia has something really worthwhile here. Of course, there are concerns whether the exploitation will be carried out in accordance with environmental standards. The EU has good sustainability standards. It's not just about German interests, it's an issue that EU member states will deal with, given that preserving the environment in Europe is a really important issue," Merkel said.