BELGRADE -- The President of Serbia, Aleksandar Vučić, is attending the ceremony marking the completion of works on the construction of the Belgrade Waterfront Tower.

BELGRADE -- The President of Serbia, Aleksandar Vučić, is attending the ceremony marking the completion of works on the construction of the Belgrade Waterfront Tower. 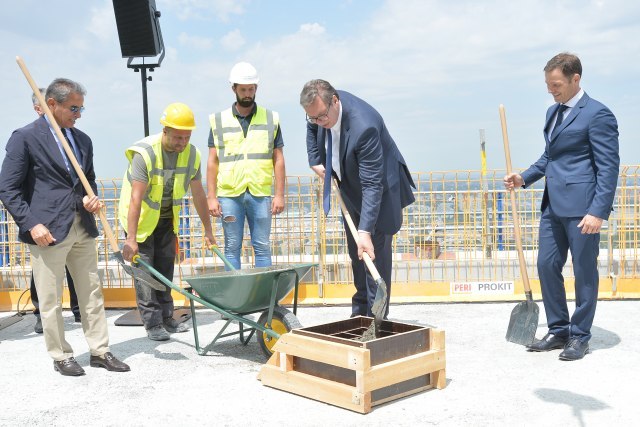 "I am proud of this. Until just a few years ago, this was all just a dream," said Vucic.

He pointed out that the Tower will be in full function by the middle of next year.

"This is a special day for all of us who participated in this project. Something that was just a dream has become a reality and will go down in history, and is already becoming part of everyday life in Belgrade and Serbia, as well as the region. When we promised to our people that the most neglected part of our capital will get a new look, many did not believe it", Vucic pointed out.

As Vučić pointed out, one of the most luxurious hotels will be located here.

"What is important is that this is by far the largest construction site, about 2.200 workers work here. I want to thank everyone who work here because we could not do it alone, we are learning a lot," Vucic added.

As he pointed out, there is no better view in our country - you can also see Srem, Banat, Šumadija... "Many thanks to all workers from different parts of Serbia, but also from the region, who built and will continue to build," said Vučić.

The completion of the works on the construction of the Belgrade Tower was marked by a symbolic pouring of concrete. According to the words of the president of the Eagle Hill company, Mohamed Alabbar, and the Minister of Finance, Siniša Mali, famous world fashion houses, such as Louis Vuitton and Gucci, should come here in August.

Mohamed Alabbar thanked for the opportunity to implement such a project, claiming that it will improve the lives of all citizens.

Vučić about salaries and pensions

Asked whether there will be an increase in salaries and pensions this year, Vučić said that last night he received the final results for the first six months, according to which the deficit in the state treasury is clearly smaller than planned.

"The plan was for the deficit to be 198 billion, and that is something that the assembly approved and accepted by the IMF. Our deficit is three times smaller, it is 75 billion. That is more than a billion euros better than planned," he explained.

Vučić said that this was achieved on the basis of better income, for some 300 million euros, which is why he drank a glass of brandy with his associates this morning.

At the same time, he expressed dissatisfaction because not enough was spent on projects.

"I begged the ministers back in April to spend money on projects. This shows that they did not prepare enough good projects. We should have spent more money. When we spend, we encourage the growth rate," he said.

Vučić asked the ministers to speed up their work, and before they go on vacation, to check the status of the projects and start spending money.

When it comes to the deficit rate, he pointed out that it will be much lower than expected.

"All the data tell us that the public debt rate will not be over 60 percent, which is great news, having in mind how much it is in other countries in Europe and the EU," he said.

Vučić emphasized that it is important for the people because if things continue like this, citizens can expect a significant increase in salaries and pensions, in the conditions of a pandemic, as he said after years in a row in which they have increased significantly, it will be done this year as well.

"That would not be possible without growth, growth in construction, big jobs, dreams that we had. We have never achieved such good performance", he stated. He said that by the end of the year, Serbia will overtake one EU country in terms of income, and another one next year, and then other states as well.

"We are slowly reaching European standards in terms of salaries and pensions," he concluded. President visited the construction site of Belgrade Waterfront last month, when he announced that there is a record number of workers on it.