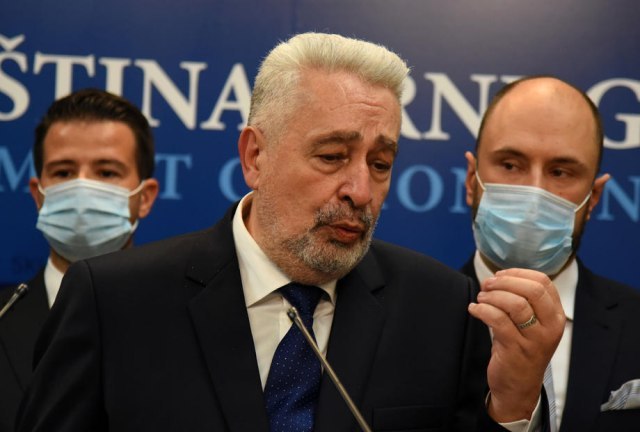 Some of the Montenegrin media speculate that the current prime minister is "already former" and that it is certain that he will be replaced by the president of Demos, Miodrag Lekić.

Consultations on that have already started unofficially within the three coalitions, which form the parliamentary majority, Novosti has learned.

"Today, we will inform the public about the next moves, but it is clear that if Minister Leposavic is replaced with the DPS, Prime Minister Krivokapic will no longer have legitimacy," one of the DF leaders, Milan Knezevic, told the paper.

The Podgorica portal Borba also writes that the representatives of the parliamentary majority have already started informal talks on resolving the political crisis caused by the withdrawal of support for Krivokapic.

Referring to several sources, the portal writes that these talks will be intensified in the coming days in the direction of concretizing future activities and new personnel combinatorics.

"Prime Minister Zdravko Krivokapić is already a former man, and he could be replaced by Miodrag Lekić, one of the leaders of the coalition 'Peace is our nation' (Aleksa Bečić)," Borba writes.

Lekic, they say, would have a full mandate for the composition of the new government, which would include all leaders of the parliamentary majority.

Lekic, who was the ambassador of the FRY in Rome, is, the portal claims, acceptable to all parliamentary clubs of the parliamentary majority.

Members of the Montenegrin Parliament will decide today on the initiative for the dismissal of the Minister of Human and Minority Rights, Vladimir Leposavic, RTCG reports.

Yesterday, the Parliament ended the several-hour debate on the initiative of Prime Minister Krivokapić.

The session of the Assembly was marked by harsh words between the representatives of the ruling parties and Prime Minister Krivokapić, who said that immorality and political hypocrisy were present in the Parliament of Montenegro. This provoked a sharp reaction from some MPs from the ruling parties.

Minister Leposavić said that it would be easier for him not to be a minister from today, and said that the Government would survive. Representatives of opposition parties, as well as the Civic Movement URA, announced their support for Krivokapic's initiative.

The ruling Democratic Front (DF) and the Socialist People's Party (SNP) said they would oppose it. Democratic Montenegro announced that, if there is no agreement within the parliamentary majority, that party will not participate in the dismissal of the Minister of Justice with the Democratic Party of Socialists (DPS).

However, if Krivokapic falls, the Montenegrin government will also fall.

"The solution is in dialogue, not in quarrel and primitivism," Martinovic said on Twitter.